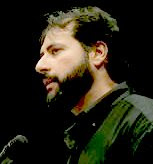 Raymond Ibrahim is already known to most readers from his excellent scholarship and anti-jihad reporting, first at Jihad Watch, and then later at the Middle East Forum and other outlets.

Mr. Ibrahim was recently invited to speak about Islam at Everett Community College in Washington State. The Council on American Islamic Relations (CAIR) objected vigorously to his presence on campus, and lobbied to have the invitation withdrawn. The college authorities stood fast, however, and Mr. Ibrahim appeared as scheduled.

The TV news report below contains some examples of very unusual behavior, especially coming from an American academic institution.

First of all, a college administrator staunchly defended the importance of free speech, even unpopular speech by someone that Muslims consider “hateful”.

Secondly, the students listened to the speaker, instead of shouting him down. One of the students — the only one quoted on camera — even described his experience as positive and informative.

Thirdly, the TV viewer was able to hear quotations from the Koran, and even a brief definition of the word dhimmi — a very unusual occurrence in an MSM news outlet.

Finally, the only response by CAIR was a simple assertion that Mr. Ibrahim was “wrong” — no counter-quotations from the Quran or other refutations. This is quite telling.

None of this could ever have happened at Yale or Harvard. The difference must be that it was a community college, rather than a bloated corrupt politically correct university. Dymphna has often said that community colleges are the only public institutions in the USA where real education still occurs, and this incident is yet more evidence that she’s right.

It also tells us that we should aim our American Counterjihad efforts at community college audiences — at least in areas that are not excessively culturally enriched.

Many thanks to Vlad Tepes for YouTubing this clip. The news video and an accompanying article are below the jump:

The Council on American Islamic Relations asked the college not to allow Raymond Ibrahim to speak. But the college didn’t budge.

Everett Community College invited Ibrahim, an author and blogger, to share his viewpoint on Islam even though some local Muslim leaders say he’s filled with hate.

Ibrahim won’t say if he’s Muslim or not – only that he’s spreading the truth about Islam. The published author, born to Egyptian parents, says he wants Americans to understand the religion.

Quoting a verse he claims is from the Quran, Ibrahim says, “This verse is 3:28 and it says let believers – Muslims – not take infidels – non-Muslims – for friends and allies.”

Ibrahim says Muslims like Osama bin Laden and others believe they are carrying out Sharia law – the Islamic code of law – which says Muslims are obligated to convert non-Muslims by persuasion or violence.

“Because it’s divine. It cannot be changed if you’re a true believer. If God is telling you to live this way,” he says.

“Well, it’s the 21st century, and we have to make things a little more lax. If you’re a Muslim, you’re free to do that. But I find it not logically consistent.”

Not so, says the Council on American Islamic Relations, or CAIR. The civil rights group and dozens of local religious leaders asked the college to close the door on Ibrahim. They say he incites fear, hatred and violence against Muslims.

But Everett Community College officials told KOMO News they won’t silence free speech, even if some feel that speech is filled with hate.

“We believe that when we have open dialogue, and students can hear different views on things, it can lead to the development of critical thinking,” says Craig Lewis of Everett Community College.

The college allowed local Muslims to speak to students around three months ago. They shared their viewpoint, and on Thursday, Ibrahim shared his.