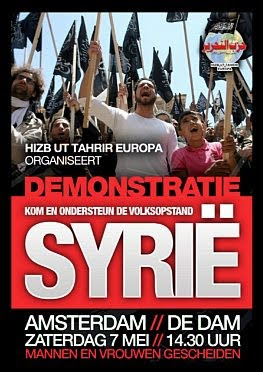 “Come and support the Syrian uprising — men and women separately.”


The radical Islamic group Hizb ut-Tahrir organized a demonstration yesterday in Amsterdam to support the protesters in Syria. In an unusual move, the organizers separated male and female demonstrators, in accordance with strict Islamic law.

If there were any doubt that the Salafist groups were involved in the “Arab Spring” uprisings, yesterday’s event would remove them. Hizb ut-Tahrir’s support for the Syrian protesters indicates a substantial Salafist presence among the regime’s opponents.

Our Dutch correspondent Bolleke has compiled a report on what happened yesterday in Amsterdam:

Demonstration? Yes, but with separated sexes.

There is a fuss about a demonstration at the Dam. There were protests against the violence in Syria. Men and women who participated in the demonstration on the Dam last Saturday were in separate courts. These were trimmed with ribbons. The protest was organized by the conservative Islamic organization Hizb ut-Tahrir, and accordingly the meeting was held under strict Islamic rules. What is immediately striking on their poster is an instruction: men and women separately. The call to demonstrate on Saturday in Amsterdam led to furrowed brows, from politicians from left to right.

About one hundred men and women participated in the rally, which was organized by the Dutch branch of Hizb ut-Tahrir (banned in Germany) “in response to the violent actions of the Syrian regime against its own people.” With the demonstration they wanted to support the popular uprising in Syria and “all other Muslim countries”. Even young children participated in the march.

Hizb ut-Tahrir means “Party of Liberation”. The group wants an Islamic state with Sharia (Islamic law) in place. The movement states that poverty in Muslim countries is a consequence of the system that the colonial countries left and “subsequent neglect by the Muslim leaders of their own people.”

Participants at the Dam shouted Arabic slogans and “Allahu Akhbar” (God is greater). They waved flags, showed photographs of victims of violence in the Middle East, and carried signs bearing slogans such as “The West’s puppets will fail, Islam will prevail”. “We do not want to provoke and we wish not to be provoked,” shouted one of the organizers.

Last year Hizb ut-Tahrir called on Muslims in the Netherlands not to vote in the parliamentary elections. It would not fit Muslims to actively participate in such Western democratic achievements as elections.

More pictures of the demonstration here.

Bolleke adds a translation from a column by a local politician:

About a bizarre demonstration in our Amsterdam

A bizarre demonstration took place on Saturday, May 7 at the Dam in Amsterdam. The goal seemed noble: to support the insurgents in Syria trying to get rid of a dictator.

A real concern was that there were many children. They invariably spoke good Dutch. So these children grow up in families where women do not have the same rights as men and where women have to be strictly segregated from men. These children must take their positions in our society in ten to fifteen years. It’s a failure to integrate, in my view, to which we should give political attention.

Although the demonstration with flags looked threatening, you should be careful not to reject the form at first hand. Unfortunately I could not understand what was said. My Arabic is not good. Next to me stood a man who listened in disbelief to what the speaker was saying. He shook his head vehemently and explained to me that these people are very dangerous. They want a strict Islamic state in Syria and even go so far as to call the inhabitants of Syria not to vote when elections come as no party is sufficiently Islamic to them.

The demonstration against oppression was just turning a different color for me.

Fortunately, there was a speech in English. That made the situation worse. The West including America is responsible for the dictators and tyrants who oppress Muslims. More strongly, the West has an interest in the oppression of Muslims, said the ringmaster. And to top it off, he asked why the West is still not intervening.

It’s the world upside down. When, after much insistence, the West finally cautiously intervened in Libya, the Islamic organizations stood in front to speak shame about the intervention, which they themselves had asked for.

The goal became increasingly evident during the demonstration: only the Quran will bring salvation to the Muslims. Distance should be established with the West. This is not my interpretation, but it was said literally.

That could be so. But if these people were to do the same as what they did in our free country now in Syria and quite a few other countries, the result would not be this column, but a bullet in their heads.

It is an effrontery to preach what they preached, and to measure up the West as they did and at the same time taunting our freedom, our values of equal rights, as they did.

The ribbons of the garlands of commemoration day fluttered gaily in the wind in the face of this bizarre demonstration.

Frank van Dalen,
Member of the city council of Amsterdam for the VVD

7 thoughts on “A Gender-Segregated Revolution”