When Osama bin Laden was executed a week ago, many Americans responded by staging celebrations in public places. However, not everyone felt like celebrating in such a fashion, no matter how cheered they were by the thought of such a monster burning in the deepest pits of Hell. Even here in the USA some people were opposed to public festivities for the occasion, and the reaction in Europe was notably restrained.

German Chancellor Angela Merkel got herself in hot water for expressing joy over the death of Mr. Bin Laden, and it’s possible that she may even be charged for what is considered a criminal act in Germany. In a strongly-worded article, the noted American conservative Lawrence Auster took issue with the Germans’ reaction to the death of Bin Laden and their condemnation of their own Chancellor.

Manfred Kleine-Hartlage, a German blogger who is also the author of Das Dschihadsystem: Wie der Islam funktioniert (“The Jihad System: How Islam Works”), has submitted the following guest-essay in response. He believes that Mr. Auster’s article raises some fundamental questions about who the enemy is and what the Counterjihad ought to be, and demonstrates the gap between American and German conservatives. 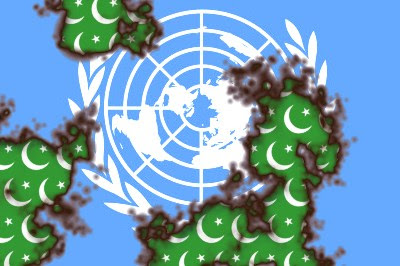 From a German Point of View: A Reply to Lawrence Auster

On May 6, Lawrence Auster posted a comment on Germany’s reaction on Bin Laden’s death — a comment suddenly highlighting political tensions most of us are normally not aware of. I think it is worthwhile to examine Mr. Auster’s argument to make clear the nature of these tensions, and what they could mean to the Counterjihad.

Mr. Auster’s starting point is that Chancellor Angela Merkel has been criminally charged for expressing delight over Bin Laden’s demise. He then quotes a poll according to which “64 percent of Germans do not see the death of Osama bin Laden as something to be celebrated”. To Mr. Auster, this indicates the “spiritual death” brought upon Germany “by the consistent application of liberalism”.

There are some points Mr. Auster doesn’t seem to understand. First of all, the question was not whether Bin Laden’s death was good or bad, but whether one should celebrate it. In Germany, many terrorists have been killed by security forces during recent decades, and some committed suicide in jail. In no single case did a German government express satisfaction or delight about it, and in no single case were there public celebrations of the kind we are now witnessing in America. Celebrating anyone’s death, even that of an enemy, is considered indecent in Germany, and therefore Mrs. Merkel’s statement was at least an embarrassing faux pas, regardless of whether it was illegal or not. It is something that is simply not done in this country.

I don’t blame Mr. Auster for not knowing and not understanding the customs of a foreign country; I just think he should be reluctant to judge what he doesn’t understand.

Up until now this has been just a minor disagreement between most Germans on the one hand and most Americans on the other. Given the irrelevance of what we are talking about, it is all the more dismaying that Mr. Auster seizes this opportunity to trigger an avalanche of hate and prejudice against Germany, beginning with:

And by the way, why are we keeping 50,000 U.S. troops, at a cost of billions a year, in that dead land? For what purpose, other than feeding their economy, which happens to be the largest in Europe?

Well, they are not here to protect Germany from invasions. Indeed, we are being invaded, as any European nation is, but the U.S. is the last country who would like to protect us from that — we will pick up this point below. The U.S. has bases in Germany because U.S. forces in the Middle East are supplied from here (and kidnapped persons are distributed from here to secret CIA jails around the globe).

Just think, if the anti-Hitler plotters in 1944 had succeeded in killing him, and if some German leader had expressed his joy, this German judge, if translated back to 1944, would seek to punish him. I guess Germany hasn’t changed so much after all, hmm? Pure liberalism, which the Germans in their humorless fanatical thoroughness aspire to as the opposite of Nazi totalitarianism, is another form of totalitarianism. And in the same way, as I have often remarked, the German-championed transnational opposite of the Nazi nationalism which sought to destroy the nations of Europe, is also destroying the nations of Europe. One way or another, whether in their Nazi form or in their hyper-liberal form, the Germans pose a determined threat to the nations and peoples of the West. To paraphrase Churchill’s famous remark about the Germans, they need to be kept at our feet, or else they will go for our throat.

I am not being extreme or “anti-German” when I say that.

Which indeed shows that he doesn’t share German humourlessness.

The Germans agree with me. They see themselves as a threat to others. That’s why they say that the EU is necessary, to keep them, the ever-threatening Germans, in check.

It started with the re-education after 1945, and this re-education is still going on. To poison an entire nation with self-hatred turned out to be a working concept, and this concept, once successfully applied, was generalized to the Western world as a whole, and as the concept of “white guilt” is now undermining our civilization. This is nothing you should blame the Germans for. They were just the guinea pigs.

The million-dollar-question is: Why is this done, and who does so?

Mr. Auster may not understand much about Germany, but he has quite correctly understood that we don’t share the feelings of triumph on Bin Laden’s death — not due to appeasement, or liberalism, or decadence, and not only due to a special German concept of decency described above. It may be shocking to some, but even militant counterjihadists like myself don’t share it.

Yes, Bin Laden was our enemy, but on the list of our enemies he was not number one, and not even number ten. Islam is marching forward in Europe not by terrorism, but by immigration and ethnic struggle, with strong support from the international political elites. It makes no sense to assert a difference between American and European elites, because they all belong to a transatlantic network centered in, but not confined to, America. Within this network, strategies are made compatible with each other, so that there is no such thing as a strictly national policy. There are disagreements on minor questions, but the general direction is towards establishing a global uniform civilization. The EU is part of this process, and an analyst blaming just Germany for that, as Mr. Auster does,

proves that his hatred of a particular country is stronger than his analytical capabilities.

Why is the leading power in the “war on terror” at the same time urging France to open herself to Islamic infiltration and secretly fostering this infiltration, as we know by Wikileaks (and there is no reason to assume that the same strategy is not applied to other European countries)? Why is the European power most passionately joining this war — Great Britain — at the same time and with the same passion engaging in self-Islamization? Why are the Anglo-Saxon powers, while at war with more than one Islamic country, urging Europe to enlarge the European Union more and more, predictably with the result that Turkey and North Africa will join the club, thereby opening Europe to a flood of Muslim immigrants?

The obvious answer is that Westernization of the Islamic world and Islamization of the Western world are two sides of the same coin.

Establishing a global uniform civilization requires the destruction of traditional patterns of values and loyalties. Nations, religions, and traditions enable people to express solidarity with each other; they are a the natural enemies of any tyranny. Globalism means to dissolve these ties that hold society together, making men mere perfect consumers and members of the labour force, subject to a global system of supranational institutions responsible to nobody. Such a system of global mobility of capital and labour, i.e. a global market economy, tends towards anarchy on the micro level, thereby requiring further empowerment of the supranational level to enforce a peace that the individual states are no longer able to preserve.

This is what the political classes of all Western countries, including the United States, are working for. The Muslims with their jihad ambition and the Left with its childish multicultural utopia are just seen as useful auxiliary forces, which is the reason why they are given their head.

This is behind the slogans about spreading “democracy”, and “liberty”, and “good governance”, and so on; and this is behind the phrases “cultural enrichment”, “tolerance”, “welcoming culture”, and so on. It is probable that those responsible believe in what they say. They probably really believe that they work for a system of peace and freedom. Unfortunately, this demands that opponents are not only enemies, but devils, seemingly working for war and tyranny. The utopian concept of “one world” implies a hyper-morality and entails the de-humanizing of the enemy.

Labelling opposing countries “rogue states” means not to abide with established legal standards with respect to these countries. As my own country has twice been declared a rogue state in the last century, I know what I am talking about, and seeing how easily even a mere opinion poll provokes pure anti-German ethnic hatred among Americans (I think Mr. Auster’s attitude is representative), it isn’t hard to imagine what the reaction would be if Germany seriously fought against Islamization. Even conservatives like Mr. Auster, I suppose, wouldn’t stand by our side.

Torturing so-called terrorists in Guantanamo and elsewhere is not an exception to the rule due to irrefutable requirements of national security (by the way: if it was necessary to examine Bin Laden’s driver, why was it not necessary to examine Bin Laden himself?), and throwing Bin Laden’s corpse into the sea is the consequence of this de-humanization. At the same time, it is a warning to any opponent of the new world order, e.g. for counterjihadists, that they have no chance of being treated according to civilized democratic standards if their opposition becomes too strong.

What they do today with Bin Laden is what they did yesterday with German generals, and what they will do tomorrow with anyone fighting their utopia. That’s why I don’t celebrate Bin Laden’s death.

Mr. Auster’s polemics have shown the gap between Anglo-Saxon and German conservatism. To bridge the gap a little bit, I have started a new blog, German Views, in order to make important articles from the conservative German blogosphere available in English. I have been planning this for a long time. Mr. Auster’s article was the impulse to start it now, and this text is, at the same time, the starting post.

63 thoughts on “The Real Problem is “Global Governance””