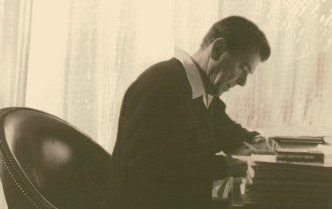 A fruitful way to commemorate the centennial of President Ronald Reagan’s birth is to read or listen to what he had to say. The excerpt below is from the book, Reagan in His Own Hand: The Writings of Ronald Reagan That Reveal His Revolutionary Vision for America.

The passage is revealing of several things, among them Reagan’s ability to write and to craft his speeches. This one is from the many five-minute radio talks he gave in California. It comes from the interregnum period between his years as California’s governor (1967-1975) and his presidency. At the time he would have been working on his second presidential primary campaign. Reagan was ‘third time lucky’; he won the Republican nomination and became President in 1980.

The Left declared him an intellectual lightweight, a Hollywood actor who parroted the lines others wrote for him. The book proves otherwise, showing him to have read and thought deeply about the issues of the day. He was one of the many old-fashioned Democrats who left the ranks of liberalism as it came more and more to represent socialism. As many of us were to say, sadly, “I didn’t leave the Democratic Party, it left me”.

Among his staff, Reagan was famous for his yellow legal pads on which he wrote many of his speeches. It was those pads which were used as the manuscripts for the book. Thus you will see his own editing as he creates the talk. (It was a personal revelation to me to read his speeches and note how similar are our editing styles.)

Reagan also used 4×6-inch cards to make summary notes of his main ideas for a given talk. As usual, the Democrats denigrated this method, too, calling the cards proof of his reductionist thinking. A speech whose main ideas were written on card stock was confirmation of a lack of originality or intelligence. [ On the other hand, they seem to have no problem with a leader who is hooked on his two teleprompters, giving us an image of a president who appears to be speaking to us as he watches a tennis match, his head bobbing back and forth. I’ll take the 4×6 cards myself.]

We can argue whether or not Reagan stayed true to his “revolutionary vision for America”. He failed to abolish the Department of Education (surely one of the worst bureaucracies ever foisted off on Americans, especially our children). The Department of Energy stayed put, too. The Ludwig von Mises Institute published an essay in 1988 summing up how badly Reagan went astray. In “The Sad Legacy of Ronald Reagan”, Sheldon L. Richman noted the myriad of ways RR had violated his own economic principles:

… after nearly eight years of Reaganism, the clamor for more government intervention in the economy was so formidable that Reagan abandoned the free-market position and acquiesced in further crippling of the economy and our liberties. In fact, the number of free-market achievements by the administration are so few that they can be counted on one hand-with fingers left over…

Those were big failures, but he also had iconic moments of success, being the man blessed to be in office when Soviet Russia imploded. He can be credited with helping it into the grave with his famous challenge, “Mr. Gorbachev, tear down this wall” — part of his speech in 1987 at the Brandenburg Gate where he had been invited to commemorate the 750th anniversary of the founding of Berlin.

Reagan also forged a strong bond with England via Margaret Thatcher*, another supporter of conservative economic theory. Both leaders made mistakes, but both were anchor points for an important turning point in Western history.

We haven’t seen the like of Mr. Reagan since he left office. We’ve had folks who claim his mantle but so far no one is willing to do the hard work such an inheritance would require. Not even Reagan lived up to his own hopes. But at least he had a political philosophy which was congruent with the founding ideas of our first leaders. His vision of a smaller government, more liberty and less noblesse oblige from the Ruling Class has not been articulated as clearly and simply since he left Washington, D.C.

Reagan may have had his beginnings as an actor but his final public play was far better than the third-rate thespians who have strutted through the Oval Office since he left the stage.

Ronald Reagan has proved to be a hard act to follow.

*please don’t clog the comments with vitriol about PM Thatcher — this is a memorial post dedicated to Ronald Reagan.

Shaping the World for 100 Years to Come

In this election year many of us talk about the world of tomorrow but do we really think about it?…

Sometimes it’s very easy to get very glib about how the decisions we are making will shape the world for a hundred years to come. Then A few weeks ago I found myself faced with having to really think about it: what are we doing today & what people (not history) PEOPLE LIKE OURSELVES will say about us.

I’d been asked to write a letter for a “time capsule” which would be opened in Los Angeles 100 yrs. From now. It will be The occasion will be the Los Angeles Bicentennial & of course our countrys tri-centennial. It was suggested that I mention some of the problems confronting us in this election year. Since I’ve been talking about those problems for about some 9 months that didn’t look like too much of a chore.

So riding down the coast highway from Santa Barbara — a yellow tablet on my lap (someone else was driving) I started to write my letter to the future.

It was a beautiful summer afternoon. The Pacific stretched out to the horizon on one side of the highway and on the other the Santa Ynez mt’s. were etched against a sky as blue as the Ocean.

I found myself wondering if it would look the same 100 yrs. from now. Will there still be a coast highway? Will people still be travelling in automobiles, or will they be looking down at the mountains from aircraft or moving so fast the beauty of all I saw this would be lost?

Suddenly the simple drafting of a letter became a rather complex chore. Think about it for a minute. What do you put in a letter that’s going to be read 100 yrs. from now — in the year 2076? What do you say about our problems when those who read the letter will alr know what we don’t know — namely how well we did with those problems? In short they will be living in the world we helped to shape.

Will they read the letter with gratitude in their hearts for what we did or will they be bitter because miserable the heritage we left them was one of human misery?

Oh I wrote of the problems we face here in 1976 — The choice we face between continuing the policies of the last 40 yrs. that have led to bigger & bigger govt, less & less liberty, redistribution of earnings through confiscatory taxation or trying to get back to the original course set for us by the Founding Fathers. Will we choose fiscal responsibility, limited govt, and freedom of choice for all people/ Or will we let an irresponsible Congress take the final set us on the road our English cousins have already taken? The road to ec. ruin and state control of our very lives?

On the international scene two great superpowers face each other with nuclear missiles at the ready — poised to bring Armageddon to the world.

Those who read my letter will know whether those missiles were fired or not. They Either they will be surrounded by the same beauty I knew as I wrote the letter we know or they will wonder sadly what it was like when the world was still beautiful. before that awful day when civilization broke down.

If we here in this election year of our Lord 1976 today meet the challenge confronting us, — those who open that time capsule in 2076 100 yrs. from now will do so in a place of beauty knowing peace, prosperity and the ultimate in personal freedom.consistent with an orderly, civilized society.

If we don’t meet keep our rendezvous with destiny, the letter probably will never be read — because talk of individual freedom will not be permitted in that world 100 yrs. from now which we are shaping and they will live in the world which we had a hand in shaping andwe left them, a world in which no one is allowed to read or hear such terms as of individual liberty or freedom of choice. & individual liberty.