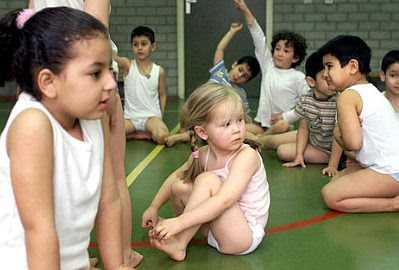 Our Dutch correspondent Sagunto sends this follow-up on the situation in Amsterdam-West. First, a note from the translator:

Just a few days ago, a local school from the inner city district of Amsterdam-West made the news because of a Moroccan girl who was beaten into hospital over a Twitter photo. Now Amsterdam-West strikes back, with policies aimed at encouraging “social cohesion”. With their firm measures, the local mandarins have decided to bypass and actually violate Dutch law. Parents are forced to accept a veritable redistribution of educational possibilities for their offspring, in a bureaucratic attempt at whitewashing [no pun intended] the negative effects of Multiculturalism. The news was featured in several newspapers, including this Monday’s Telegraaf.

Normally when a news item is considered important and is being hotly debated online, there are about 200 to 300 reactions. When people are really motivated to donate their 2 cents’ worth, comments rise to a level of, say, 500 during the whole day. This article is accompanied by 659 comments and the number of 500 was reached around noon. This usually indicates that the general public is really p***ed off about the news concerned.

And his translated article from De Telegraaf:

Amsterdam — Parents in Amsterdam-West are going to be put under the obligation to send their children to a local school, even if they’d rather put their child at another school. That is the result of new policies that have been put into effect in this part of the city at the start of this year. With these steps, the district council goes against the parents’ right to freely choose a school, a right that is supposed to apply everywhere in the Netherlands.

As a result of these measures, a lot of children end up unwillingly in so-called “black schools” [PC lingo for: Muslim majority schools]. Since January 1st of this year, people living in this city district are expected to send their children to a local school in their own neighbourhood. Selection goes by postal code. This means that in a local area like the Kolenkitbuurt, where immigrants [mostly Muslims] make up 80 percent of the population, a child can only be sent to a black school.

A great number of parents are furious about the plans. ‘This is an outrage,’ says a local resident, living in the Bos en Lommer area. ‘When you move here and buy a house, you have to walk a “reverse path” of integration [meaning: adapt to Muslims]. And now we don’t even have the choice about what school we send our kids to. I have signed up my children for a mixed school, not far from here. But I’ve received notice that I can’t take my kids over there because it is not in my neighbourhood. This is state control with a capital C. We have freedom of education in this country, but not in Amsterdam. It is a crying shame that I am forced to participate in an experiment with my children.’

The VVD party [right-wing, “liberal” party] tried to stop the new plans in December last year, but the leftist administrators of this city district’s council were impervious to the arguments presented. ‘This is very far removed from the freedom of education,’ says Joris Blaauw of the VVD. ‘Freedom of choice is of essential importance. Moreover, bad schools are being rewarded by these policies.’

At the start of this year the local district council has erected a centre for effectuating the state distribution of education, the bureau called: “Schoolwijzer-West”. Registering for primary education is no longer possible with the schools themselves; it has to be done at the centre. Parents in disagreement with a decision for placement can appeal at the bureau, but such complaints are judged by a commission designated for that task.

Spokesmen for the Amsterdam-West district, however, think it is a great policy. ‘Kids going to school in their own neighbourhoods will help the schools become a true reflection of the community. This will enhance the connection the school has with that neighbourhood,’ the city council asserts in an official statement. ‘Going to school in your own neighbourhood has advantages. Less fuss with getting the kids to and from school, no more of biking around the city. It is now easier for the kids to play with classmates, at home and on the streets.’

The chairman of the city council, Martien Kuitenbrouwer, claims to have spoken with concerned parents. ‘This is not meant to limit the freedom of choice, but to redress the balance between popular and unpopular schools. Parents can submit a preference for three schools. If that fails, the bureau intervenes. In that way we indicate at an early stage at which school the child will be placed.’

A local resident from the Mercatorplein area, a socially somewhat weaker neighbourhood in the capital, has already given up hope. He will be moving soon, partly because of the interventions by the district council. ‘Living in Amsterdam while raising children is a tough task anyway. At least I want to be able to find a good school for my children. But if I seek to enlist my child at a Montessori-school [few Muslims, “white school”] I can’t make it happen. This line of policy is keeping people from living in “black” neighbourhoods and it is far removed from the freedom of education. That is insane beyond belief, isn’t it?’

114 thoughts on “Experimenting With the Children of Amsterdam”