Michelle Obama is a trip. Not the traveling kind but the one where you do a pratfall in front of everyone and don’t even know your face is on the cement.

Our First Lady travelled in great luxury aboard her private jet to strongarm the Olympic Committee into giving Chicago the Olympics for 2016. And she brought along a whole passel of friends and hangers-on to while away the long, hard hours of her flight.

Unfortunately, what the rest of the world would see as a grand opportunity to visit a first-class city and be treated like royalty, Miz Michelle describes as a personal sacrifice:

In her speech in Copenhagen today, First Lady Michelle Obama said her trip to Denmark… as well as tomorrow’s visit by President Obama, is a “sacrifice” on behalf of the children of Chicago and the United States. “As much of a sacrifice as people say this is for me… or the president to come for these few days,” the first lady told a crowd of people involved in the Chicago project, “so many of you in this room have been working for years to bring this bid home.” 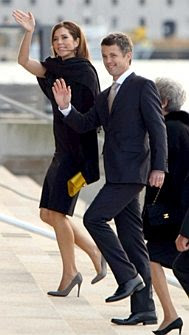 And she thinks what, that the real royalty in Denmark is breathless with excitement at the idea of having to put up with this kind of blather for three days? Let’s hope Crown Princess Mary escapes her withering gaze.

Who cut the tether on Miz Michelle’s tie to reality? Does she have any sense of proportion left?

This woman, who claimed not to be proud of her American citizenship until her husband was nominated to run for president, sure can demonstrate her provincial soul. At the same rally she noted the similarity of her glad-handing and arm-twisting in Copenhagen to being on the campaign trail in Iowa:
– – – – – – – – –

“As my husband would say, we are fired up and ready to go in here,” she said, echoing the slogan that generated so much excitement on the campaign trail last year. Comparing the contest in Denmark to the one in Iowa, the first lady added, “Nobody makes the decision until they’re sitting there. So the next few days really provide us with a real opportunity to hold some hands, to have some conversations, to share our visions.”

That’s Chicago talk. I’ll translate the essence: “…the next few days really provide us with a real opportunity to twist some arms, to get in some faces, to make a few offers they can’t refuse…”

Got that? Copenhagen = Iowa. Who’d have known?

Just to reassure everyone about the ongoing bloodbath unrest in Chicago, Michelle told reporters before she left:

“You know, there are a number of big cities that are bidding. And when you live in a big city there are issues that are unique to urban settings. Chicago isn’t unique in that way. But that’s one of the things that I can talk about personally. I mean, you know, most of these Games are taking place blocks away from my house. There’s good security by my house these days. And while Chicago is not perfect by any stretch of the imagination, it is — people don’t live in fear. The downtown area is completely accessible.

Who lives in fear when they have half a dozen security guards close off the street if you happen to walk on it? So why do you think the Obamas’ Chicago neighbors are moving?

“But more importantly, the character of Chicago shines through. We’re Midwestern folks, and there’s a bit of southern hospitality that comes along with that place. We know how to treat our visitors with respect and with open arms. And I think that’s the character that will shine through, in addition to the fact that it’s such an international city.

“I know Mayor Daley, and he’s going to make sure that these Games go off without a hitch because that’s the kind of mayor he is. It’s not called the “City That Works” for nothing. It really works. And it’s not always perfect, but it’s really, really good.”

Meanwhile, that presidential security thingie is causing problems for Sweden on Friday morning, even though Obama won’t be going there:

The Öresund Bridge Consortium announced on Tuesday that the bridge, which carries both rail and road traffic between Malmö and Copenhagen, will be closed during the morning rush hour and at lunchtime on Friday in conjunction with Obama’s visit to the Danish capital.

The decision to shut down the major traffic artery at one of the busiest times of the day confounded Henrik Andersson, a representative for the Chamber of Commerce and Industry of Southern Sweden (Sydsvenska Industri- och Handelskammaren)

“It will cause a lot of problems,” he told The Local.

“I find it peculiar that they are shutting the bridge down. A lot of people will have to adjust their schedules.”

And representatives of Skånetrafiken, the organization charged with managing public transportation in the area, were also frustrated that they only received word a few days ahead of the expected closure.

“We were….surprised. Let’s put it like that,” said spokesperson Ulrika Mebeius.

“Nobody had informed us or our colleagues at the Swedish Rail Administration.”

Skånetrafiken is now scrambling to come up with alternate arrangements for Swedish travellers who need to make their way to Denmark on Friday morning.

Andersson added that he expected the closing of the bridge to have a negative impact on area businesses.

American presidents have that effect when they travel. Be glad he’ll only be around for a few hours.

Not much in the Copenhagen newspaper about the visit. Just a report on the “stars” and their resulting traffic jams. Oh — and a story on the influx of prostitutes to serve members of the OIC while they’re in town.

One Dane, who was responding to my thank-you note, had this to say about the Big Visit:

He, his wife and Oprah are making such a stir that I can’t even get to work in the morning. Navy Seals in the harbour, police everywhere, and special forces on the rooftops… sealing off everything.

And hey, even his greatest fans in Denmark are soooooooo disappointed that he shows up now, and not for the climate conference… is he really just like all the other politicians thinking only about the money? But how can that be??? He’s black and all that!!

That’s right: he did skip the big climate conference. But here’s the thing: nobody at the Climate Conference was responsible for getting him into the Oval Office.

However, a bunch of those American folks you see in Copenhagen are very responsible for his present job. Obie owes the Oval Office to them and when they say “go to Copenhagen, Barry me boy”, he goes to Copenhagen, making the same difficult sacrifice Michelle did as he is whisked in luxury on Air Force One.

Chicago is going broke; it can’t pay all its employees or provide normal services. But the crooks who own the town stand to make a gazillion dollars from having the Windy City as an Olympic site. The fact that the buildings become wasteful eyesores afterwards is of no concern to any of them.

Obie’s job is to come home with the Olympic bid. Period.

And to answer your question: yes, he’s just like all other Chicago politicians. You pay to play in Chicago, and the President is in Copenhagen paying for the sacrifice of riding in regal style in Air Force One. He knows the rules of the game and he’s following them.

9 thoughts on “Chicago-Style Clueless in Copenhagen”