“The mosques are our barracks, the domes our helmets, the minarets our bayonets and the faithful our soldiers…” — Turkish Prime Minister Recep Tayyip Erdoğan

A referendum on the minaret-ban is coming up next month in Switzerland, and some of the posters being used are causing quite a stir.

Our Flemish correspondent VH has compiled a report about the controversy. First, his translation from Politically Incorrect:

The Swiss city of Lucerne does not want an Islamization landmark

On November 20, the Swiss will have the opportunity to vote for a constitutional ban on the building of minarets. For this upcoming referendum, a number of sensational campaign posters have been made. The “Initiative Committee Against the Construction of Minarets” issued a poster with black minarets stabbing up through the flag of Switzerland, with in the foreground a not-too-sympathetic-looking woman in a black burka.

Youth of the city of Lucerne have now joined this initiative. They also have designed an election poster that will add some dynamite to the debate: the Lucerne water tower collapsing and being replaced by a minaret surfacing from the harbor in front of it. Muslims responded in shock: “That poster is reminiscent of the persecution of the Jews under the Third Reich!”

But what does the tipped-over water tower of Lucerne replaced by a minaret have even remotely to do with the Third Reich? 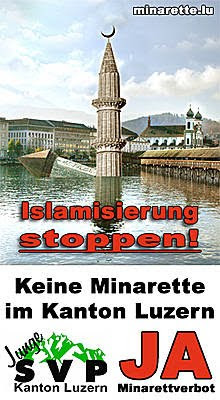 “With the water tower as a symbol we want to provoke and stir,” says Anian Liebrand, who is the president of the Lucerne chapter of the SVP Youth. According to Liebrand, the minaret is “the spearhead of the Islamization”. The poster will be put up from mid-October onwards over a large area in the Canton of Lucerne, to calling for a “yes” vote on November 29 on the prohibition of the construction of minarets.

Muslims from Lucerne are shocked and outraged. “This poster is no different from the anti-Jewish propaganda before World War II,” fulminates Petrit Alimi, who is Vice President of the Islamic Community of the City of Lucerne. The situation of Jews is simply seized today by Muslims. 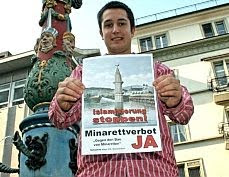 But not every comparison is flawed. If one were to say, conversely, that the water tower is replaced by a minaret, a symbol of power of a totalitarian system which has supplanted a landmark of the Occident, it would be a reasonable and sound comparison and close to reality.

And the usual veiled threat has already been expressed: Farhad Afshar (67), President of the Coordination of Islamic Organizations in Switzerland warned: “This poster is Islamophobic and provokes fear.” Moreover, he fears the negative reactions from the Muslim world: “People [abroad] will react with incredulity when they see these posters, because they have a high opinion of Switzerland.”

The federal government of Switzerland is expecting protests from abroad. For this specific reason an expert group has been created. The chairman of this group is John Matyassy, the President of the federal public relations bureau “Präsenz Schweiz” (which also has as its assignment to act when the image of Switzerland abroad is at serious risk): “In the case of negative reactions abroad, we will do the necessary clarification job. We are prepared.”

More information about the actions of the SVP Youth from Lucerne can —in due time— be read here. The Yes to a minaret-ban campaign has an extensive website with campaign material, various articles on the subject, and background information here.

And here is the declaration of the SVP Youth, as translated by VH:

Yes to the minarets initiative! 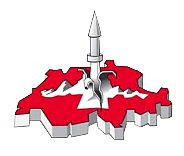 Members of the SVP Youth have joined together with other politicians, and founded the nonpartisan Lucerne Committee “Yes to the ban on minarets.” The goal is a “yes” for the referendum on November 29, 2009. Further information can be found soon on www.minarette.lu.

Religious freedom is not affected!

The minaret as a building has no religious meaning. It is neither mentioned in the Koran nor mentioned in other sacred writings of Islam. The minaret is rather a symbol of the religious and political claim of power of the Islam, that in the name of the purported rights of religious freedom — in particular with regard to the equality in the Constitution — denies the same constitutional right to others. This claim is in conflict with the Constitution and the legal system of Switzerland.

A “Yes” vote on the minarets-ban referendum does not affect the freedom of religion in any way. This freedom is thus guaranteed. A ban on minarets is also in no way directed against members of the Muslim faith. It rather seeks to discuss the problem of the religious claims to power of Islam in a democracy.

Minarets pave the way for the muezzin!

A minaret is the platform for the muezzin, for the Muslim calls to prayer. The pretense that the call of a muezzin will never sound from a Swiss minaret, is contradicted by the practice abroad. Wherever a minaret has been built, it was later followed with an application for a license for the call of the muezzin. It is naïve to believe that Muslims are fighting for a minaret as such, without having the intention to use it for this purpose later on.

Christianity and the State exist side by side, in accordance with existing secular practice, unlike Islam, which does not differentiate state from religion. Islam penetrates and mines the entire political system. Sharia law is molded strictly according to Islamic tenets. The constitutional state and the Sharia are antitheses. The minaret eventually enforces the primacy of the Sharia, and that has to be prevented in the interest of our culture.

Founding members of the Committee are:

Notes on the images used above:

10 thoughts on “The Bayonets of Islam”