In the nine days since Israeli operations against Hamas began, mass demonstrations against Israel and in support of “Palestine” have taken place in major cities all over the world. Some of them have escalated into violent confrontations with counter-demonstrators and the police, and attacks have been launched against Jews in the United States, Denmark, Sweden, the Netherlands, and Belgium, among other countries. 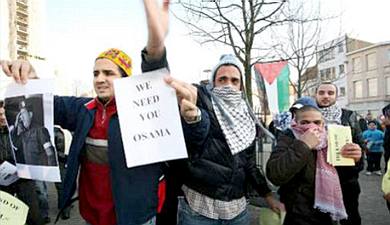 Muslim immigrants are prominent among the anti-Jewish demonstrators, but they are by no means the only participants. In Europe, indigenous fellow travelers from various political parties take part in the shouting and stone-throwing alongside their keffiyeh-clad immigrant comrades.

Notably absent from these appalling outbursts are representatives of the “right-wing extremist” parties. Communists, Anarchists, Socialists, and various and sundry other parties of the Left are well-represented among the supporters of Hamas, and occasionally join in with the “back to the ovens” Jew-hating chants.

But the “neo-fascist” parties are not involved. You won’t find Dansk Folkeparti (Danish People’s Party), or Sverigedemokraterna (Sweden Democrats), or Partij Voor Vrijheid (Party for Freedom) amongst them.

And you especially won’t find Vlaams Belang.
– – – – – – – – –
In fact, the leaders of Vlaams Belang have been prominent and consistent supporters of Flemish Jews since the crisis began — and for a long time before that. As far as I can determine, no other Belgian political party actively and openly supports Israel. See a couple of previous posts for more information.

The labeling of Vlaams Belang as “neo-Nazi” is a vile slander that has been used repeatedly in an attempt to discredit the party. Smearing real conservatives as Nazis is a favorite tactic of the Left, and they have never been more successful at it than with Vlaams Belang.

Charles Johnson of Little Green Footballs has been the most vocal and strident of the supposedly “conservative” bloggers to recycle the far left’s slanders against Vlaams Belang. Expo, Blokwatch, and Yelloman all retailed the disinformation to him, and he swallowed it hook, line, and sinker.

But recent events demonstrate better than any arguments the true nature of Vlaams Belang. What self-respecting “Nazi” organization would commit itself so publicly to the support of Israel and the Jews? Why, alone among Belgian politicians, would they stand behind the Jews? How could any dedicated anti-Semite possibly vote for them?

If there were any justice in the world, Charles Johnson would retract his smears and apologize to Filip Dewinter and Vlaams Belang.

But there isn’t, and he won’t.

6 thoughts on “Who Defends the Jews of Antwerp?”