Below is a report from our Flemish correspondent VH on the foreign doctors in Gaza who have recently been shilling for Hamas, with the help of gullible Western media outlets.

The Dutch newspaper De Telegraaf shows a video on its website in which foreign doctors declare that Israel is lying about avoiding victims amongst the civil population.

More so: up until now they declare that they only had to treat wounded civilians. Apart from the question of how well Hamas warriors can be distinguished from civilians — think of the use of child soldiers and women as suicide terrorists and as human shields — one may ask himself whether these doctors are reliable.

One of them, however, bears a striking resemblance to the Hamas terrorist Osama Hamdan. 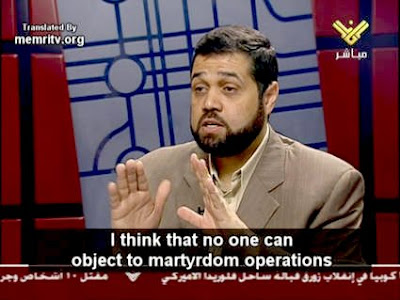 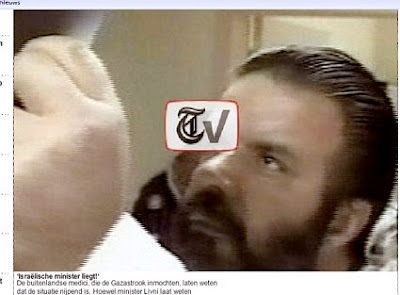 The source of most of the information coming from Gaza thus far has been from Palestinian representatives. One of the only non-Palestinian voices heard has been that of Mads Gilbert [pictured with Fatah keffiyeh], a Norwegian doctor who entered Gaza on December 31 along with his colleague Erik Fosse ostensibly to provide medical assistance to Palestinians at Shifa Hospital.

They have become media stars as the BBC, CBS, CNN, ABC, Independent, Sky News, and New York Times, among others, have turned to them as independent foreign observers to provide a presumably non-partisan perspective. They have been extensively interviewed in the Norwegian as well as the world press. In fact, Gilbert appears in so many interviews that one wonders how he has the time to provide medical help, never mind “doing surgery around the clock” as he claims.

In his interviews, Gilbert decries what he claims is Israel’s “all out war against civilians.” Condemning Israel for “deliberately targeting the [Palestinian] population” and causing “a man-made disaster,” Gilbert and Fosse claim that Israel and the UN are lying about the civilian casualty count and feed the media their own alternate statistics ( “50% of the casualties are women and children”—CBS; “children made up 25% of the deaths and 45% of the wounded”—BBC). Gilbert is even quoted by the Iranian Press TV alleging the Israelis have used unconventional weapons against the Palestinians.

So are these Norwegians indeed non-partisan foreigners providing independent confirmation of Palestinian reports or do they have an agenda? Is Gilbert simply someone “who was allowed into Gaza last week to give emergency medical aid, and who has worked in many conflict zones,” as the New York Times introduces him or someone with a partisan perspective?

Gilbert is a radical Marxist and a member of the political Red (Rodt) party, a revolutionary socialist party in Norway. He has been a pro-Palestinian activist since the 1970’s and travelled to Lebanon in support of the Palestinians during the first Lebanon war in 1982. He has long been a vocal opponent of Israel and the U.S. Gilbert has acknowledged that he cannot separate politics from medicine, stating, “there is little in medicine that is not politics.” He even criticizes the group Doctors Without Borders for providing medical assistance to both sides in a conflict instead of taking a strong stance and supporting only one party. In a 2006 article in Nordlys, journalist Ivan Kristoffersen lamented the fact that Gilbert allows his humanitarian efforts to be politicized by his radical agenda.

The extent of Gilbert’s political agenda and animus toward Israel and the U.S. is best evidenced by his radical support for the 9/11 terrorist attacks against the U.S.

In an interview with the Norwegian daily, Dagbladet, shortly after the attacks, Gilbert stated:

The attack on New York was not surprising, after the policy that has led the West in recent decades. I am upset over the terrorist attack, but am equally upset over the suffering which the United States has created. It is in this context that the 5000 dead people must be seen. If the U.S. government has a legitimate right to bomb and kill civilians in Iraq, then there is also a moral right to attack the United States with the weapons they had to create. Dead civilians are the same whether they are Americans, Palestinians or Iraqis.

When asked by Dagbladet if he supported the terrorist attack on the U.S., he replied:

Fosse worked as a doctor for the Palestine Committee in Lebanon in the 1970’s. He now leads NORWAC, the Norwegian Aid Committee. According to Aftenposten, Fosse’s passion to work on behalf of Palestinians was sparked by his time in Lebanon.

According to Verdens Gang, the largest Norwegian daily, Gilbert and Fosse’s current trip to Gaza is funded by the Norwegian foreign ministry.

Given the partisan — and in Gilbert’s case, radical — perspective they represent, Fosse’s and Gilbert’s testimony must be weighed with extreme caution.

One thought on “Doctor or Hamas Terrorist?”