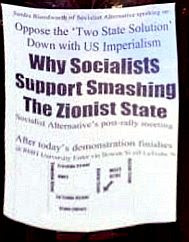 Thanks to Nilk and her photo archive, I found this photo of a flyer taped to a trash can in Melbourne during the Jan 4th pro-Palestinian demonstration.

It was from Socialist Alternative, and through the magic of digital technology, I straightened and enhanced the image.

As you can see, it was advertising a talk at RMIT University by one Sandra Bloodworth, scheduled for after the rally, and proclaimed:

Oppose the ‘Two State Solution’
Down with US Imperialism

I wish I could have attended Comrade Bloodworth’s talk, because I’m curious: why do Socialists support smashing the Zionist state?
– – – – – – – – –
Is it because Israel is a racist apartheid state, and because the Jews are at the epicenter of exploitative global capitalism — or something like that? After all, the two-faced bloodsucking rootless cosmopolitans of international Jewry are the cause of all the suffering of the worldwide proletariat — etc blah yak; you all know the drill.

But still… I’ll never find out, because as far as I can tell, Sandra Bloodworth’s talk wasn’t transcribed and posted on the web.

If any of our readers are members of Melbourne Socialist Alternative and can explain Comrade Bloodworth’s reasoning, I would be eager to learn more.

Nilk’s complete photo spread of the Melbourne demo can be seen here.

10 thoughts on “Why Do Socialists Support Smashing the Zionist State?”