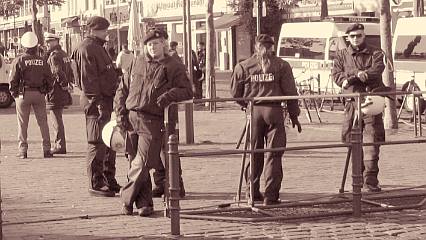 Gaia is a reader from the UK who traveled to Cologne for the Pro-Köln conference last weekend. This is her report.

One of the things to notice in her account, as in so many others, is the classical fascist tactics employed by the “anti-fascists” and their tacit allies among the police and municipal authorities of Cologne.

My Impression of the Cologne Event
by Gaia

I arrived in Cologne on the evening of Thursday, September 18th, in the hope of gaining admission to the private, political conference as a colleague of Adriana Bolchini Gaigher, who had received an invitation to this session.

At 10 am on the morning of Friday 19 Adriana, her son and I were collected by car from our hotel by a young German man “Klaus” from near Essen, who had come to Cologne with his wife and mother, and who had been instructed to accompany us to the meeting. He drove us to the city of Leverkusen which is not far from Cologne, and parked in a location near to the River Rhine.

As we were walking from the car to the towpath besides the river to reach the location of the meeting, we were stopped in our path by a group of shouting protesters who linked arms in order to prevent us walking down the ramp. They were a mixture of male and female, shouting “Nazis, racists” etc. I managed to get past them, but Adriana, her son and the driver were surrounded and impeded from proceeding further. The driver Klaus was manhandled and pushed about as he tried to protect Adriana.

There were some police further down the ramp and after some minutes they belatedly ran up the ramp to sort out the melee that had formed (see the photo below). Rather than assisting Adriana, as a legitimate invitee, to pass the protesting mob, they told everyone to move away. At this point, as I would not have been able to gain access to the meeting without Adriana, I joined her and the rest of the group and we drove back to Cologne. 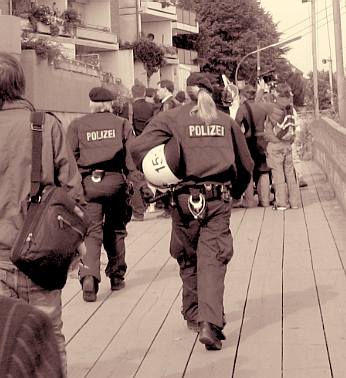 There was also a public rally in a nearby area of Leverkusen, and I believe it was at this location that Michael Kucherov was attacked. As fate would have it, he was picked up and rescued by car by the two BNP officials who had also tried in vain to gain access to the meeting.

In Cologne we managed to meet up with our German friend, Multikultur, and we spent the afternoon together.

At 6 pm we were all again picked up by our driver Klaus and taken to a location some 12 km outside Cologne, on the opposite side of the Rhine, where we were due to meet the delegates who had spent the day in the boat, the Moby Dick.
– – – – – – – – –
There was quite a crowd of people waiting on the banks of the river, mostly respectable looking, elderly German people. We were then informed that the location for the dinner had been leaked to the counter-protesters and that it was no longer safe to go there. There was no sign of the boat, so the people on land walked along the banks of the Rhine until we came to a bierkeller, where we all sat down waiting for service. But before long, the proprietor of the establishment came to tell us that we were not welcome there and requested us to leave. Most left quietly, but Adriana protested vociferously with the proprietor and when she arrived outside, staged an impromptu rallying speech to the assembled crowd, which was warmly applauded. We were also pleased to meet up with Stefan Herre and Christine Dietrich of the blog Politically Incorrect.

We then returned by car to the city, which was totally sealed off to car traffic and difficult to navigate on foot. There were masses of police vehicles, armoured cars, and police forces from many German states.

On the morning of Saturday the 20th we had the option either to make our way early to the Heumarkt or to meet up at a rendezvous point at the airport station. At around 8.30 I decided to make my way directly to Heumarkt, where already groups of Antifa were arriving.

I got through the police barriers and met up in the square with Adriana, her son, Klaus, and Multikultur. There were barriers all around the square and a considerable police presence (see the photo at the top of this post). There was a large press contingency. The Italian MEP Mario Borghezio was there and a couple of representatives of Pro-Köln together with approximately fifty German citizens, some young but mainly elderly.. We also met three people from France, from the organization MNR Megret — Mouvement National Français (one of whom was blind), some Spaniards, many journalists from all over, including one from Poland who was very interested to learn whether Mario Borghezio had any contact with like-minded Poles.

After 10 am it became increasingly difficult for people coming to the Heumarkt to gain access. Before arriving at the police barricades where they had to make their case for entry to the square, they had to pass through thick layers of hostile chanting and drumming Antifa protesters. We heard by phone from Stefan Herre that the group coming from the airport had been stopped by counter-protesters and that there seemed little chance of them getting to the location of the rally in spite of a heavy police presence.

At 12 noon, the time the rally was due to start, it was obvious that the main bulk of the attendees would not arrive, so Mario Borghezio got up on the podium to speak, holding in his hand a copy of Oriana Fallaci’s book, The Rage and the Pride. But after only about 30 seconds the power was cut to his mike and an announcement was made that the rally was over and they immediately started to dismantle the podium.

We were then trapped inside the square. The only people given police escort away were Mario Borghezio and Adriana Bolchini Gaigher, who ended up in Bonn for a further 6 hours under “police protection”. The rest were penned into the square in “protective custody’“ and were not allowed to leave. I had struck up a conversation with a local German man “Fritz” and we, together with Multikultur, decided to try and get out using an old Press Card that Fritz had brought along. After an initial reluctance the police officer let us through the barrier and we made our escape through the quieter back streets, dodging in and out of the metro tunnels until we got past the counter-protesters and look the long way round to my hotel.

I understand that those remaining in the square had to stay there for quite some time until the police escorted them over the bridge to a barrage of shouts from the Antifa. They commandeered taxis which took them to the offices of Pro-Köln where they stayed, besieged, for several hours.

At my hotel we met up with AMDG and Adosinda, who had been unable to break through into the square, and later in the day we were joined by Stefan Herre and Christine Dietrich who had been stranded at the airport and we spent some good time together discussing the recent events.

One other point of note: an alternative rally in the Wallfaff Square had been registered with the police, with Ralph Giordano, Mina Ahadi and our old friend Udo Ulfkotte as speakers. They go under the slogan “The Third Force”‘ and want to position themselves between the Anti-Islamisierungs-Kongreß and the counter-demonstrators. AMDG came across this rally on his travels around the town. There were not very many attendees.

We tried all weekend to meet up with the organizer of the rally, Markus Wiener from Pro-Köln but were blocked at every point. It was our impression that the counter-demonstrators took the initiative on every occasion and the police were less than helpful in assisting the legitimate protesters in holding their event.

5 thoughts on “My Impression of the Cologne Event”