Exhausted from their labors, the Democrats adjourned Congress for the month of August, melting into the shadows until September.

This do-nothing Congress is a disgrace. 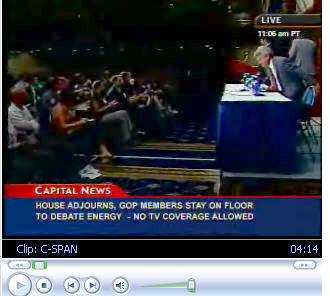 The Republicans were not happy. So as those in charge killed the lights and the public address system, many of them stayed in the dark after the mandarins called a halt to the proceedings and left town.

Rebellion! Politico has the news and updates as this progresses. Or at least they have the story until the Dems manage to get the police to make the press leave their usual outpost:

Speaker Nancy Pelosi (D-Calif.) and the Democrats adjourned the House and turned off the lights and killed the microphones, but Republicans are still on the floor talking gas prices.

Minority Leader John A. Boehner (R-Ohio) and other GOP leaders opposed the motion to adjourn the House, arguing that Pelosi’s refusal to schedule a vote allowing offshore drilling is hurting the American economy. They have refused to leave the floor after the adjournment motion passed at 11:23 a.m., and they are busy bashing Pelosi and her fellow Democrats for leaving town for the August recess.

Update: The Capitol Police are now trying to kick reporters out of the press gallery above the floor, meaning we can’t watch the Republicans anymore. But Minority Whip Roy Blunt (R-Mo.) is now in the gallery talking to reporters, so the cops have held off for a minute. Clearly, Democrats don’t want Republicans getting any press for this episode. GOP leaders are trying to find other Republicans to rotate in for Blunt so reporters aren’t kicked out.

Update 2: This message was sent out by Blunt’s office:

“All Republicans who are in town are encouraged to come to the House floor.”

Update 4: Republican leaders just sent out a notice looking for a bullhorn, and leadership aides are trying to corral all the members who are still in town to come speak on the floor and sustain this one-sided debate.

Also, Republicans can thank Shadegg for turning on the microphones the first time. Apparently, the fiesty Arizona conservative started typing random codes into the chamber’s public address system and accidentally typed the correct code, allowing Republicans brief access to the microphone before it was turned off again.

“I love this,” Shadegg told reporters up in the press gallery afterward. “Congress can be so boring. … This is a kick.”

Update 4: The scene on the floor is kind of crazy. Normally, members are not allowed to speak directly to the visitor galleries, and visitors are prohibited from cheering. But in this case, the members are walking up and down on the floor during their speeches, standing on chairs. The visitors are cheering loudly. Some members even brought in visitors, who are now sitting on the House floor in the seats normally filled by lawmakers, cheering and clapping. Very funny.

Update 5: Republicans are literally hugging each other on the House floor. Rep. Don Manzullo (R-Ill.), not normally known as a distinguished orator, just gave a rousing speech, accusing Democrats of stifling dissent. He referenced President John Quincy Adams, who returned as a House member after being defeated in his bid for presidential reelection. Waving his arms and yelling, Manzullo brought the crowd (including a lot of staff shipped in by GOP leaders to fill up the place), and he left the floor to hugs from his colleagues. You don’t see that up here every day.

Update 6: Rep Devin Nunes (R-Calif.) just pretended to be a Democrat. He stood on the other side of the chamber and listed all of the GOP bills that the Dems killed.

He then said, “I am a Democrat, and here is my energy plan” and he held up a picture of an old VW Bug with a sail attached to it. He paraded around the House floor with the sign while the crowd cheered.

Dems Turn Out the Light but GOP Won’t Go Home

No Shirt? No Tie? No Problem

Be sure to read Michelle Malkin’s take on this revolt.

At last, the Republicans show some spine. Will it do any good? I think so. Anyone who shows these people for what they are by definition have done some good.