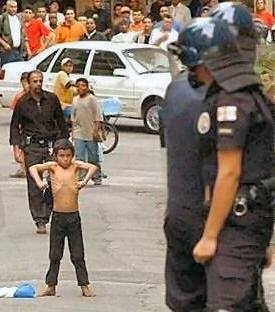 Our fearless Flemish correspondent, VH, filed this report on the latest findings of the International Conference of Western Intellectuals. The ICWI has been meeting for three days and has adopted several key recommendations regarding the aggressive Muslim exploitation of the West.

There was a general consensus that the current chaos across the West is obviously due to active suppression by Muslims, who have sowed disarray in intellectual circles throughout the Western world.

Attendees agreed that Muslims are bad, Western intellectuals are good. Fires will be set Letters of remonstration will be sent to the appropriate Muslim consulates.

Our correspondent’s report is based on this article.

Muslim World told to cease meddling in the Free West

The Muslims’ perpetual interference in many Western states has resulted in enduring domestic strife within them, they said Thursday on the sidelines of the third International Conference of Western intellectuals.

The intellectuals urged Muslim nations to change the pattern of their relations with the West in order to end the widespread conflicts.

The three-day international conference, attended by some 300 Western intellectuals from 65 countries will end Friday after the adoption of several key recommendations.

“The main cause for the chaos we see in Western countries is the external factor — the Islamic interference. Through the centuries, they exploited and suppressed non-Islamic states.”

“Muslim countries chose to stay put even when we gained freedom, meddling in our economic and domestic affairs because they wanted to expand their presence and exploit our intellectual and financial resources.”

“Foreign intervention rendered the Western world powerless to stop internal conflicts. The ongoing hostility between Palestine and Israel was not a conflict of territories but rather one between “religions”, and supported by Muslim powers.

“Israel teaches its citizens to live peacefully with Muslims. So it’s a not question of occupation by these powers, but seeking a confrontation with the Jews by Muslims.”

The intellectuals, however, acknowledged conflicts also occurred because of internal problems within Western communities.
– – – – – – – – –
“There is no unity among Western countries on economic or political views. Each of us takes our own path, building a unity in views heavily relying on our own national interests.

Western governments do not fully support free Western civil society organizations because of the “influence of foreign imperialistic Islam”.

They instead focused on developing the political and economic aspects of their Western administrations: “These national interests often hampered efforts to unite Western countries, and such interests were mostly concerned with their relations with Muslim powers.”

“Many Western countries were still attracted to their Muslim counterparts, thus always welcoming everything they had to offer.”

The chairman said the conference was aimed at finding shared ideas among Western intellectuals about the root causes of conflicts and enabling intellectuals to view them objectively rather than based on their own personal interests.

“We hope intellectuals can identify aggressions, and can build a defense system against aggressions,” he said.

The conference was an event to “declare a clear stance against injustice by the Muslim world” toward Western communities worldwide”.

The recommendations to be issued at the forum should be adopted as a policy in each of the participating countries, he added.

Thanks to Politics 101 Malaysia for the great image. Especially see his post Kambing Bag.