First of all, I made an essay about Indo-European languages at the Danish blog Snaphanen, in case somebody didn’t see it. I’ve also started on a history of medicine in five parts. The first two have been published at The Brussels Journal and Atlas Shrugs. Second of all, I started on the essay Ten Reasons to Get rid of the European Union several months ago. I haven’t forgotten it, and will finish it now. The Irish EU vote is a good excuse. Feedback on ideas is welcome.

I was reading The Shock Doctrine by Naomi Klein recently. That is, I made an attempt to read it. I gave up after a few chapters. There’s only so much nonsense a man can take before his head explodes. For instance, Klein talks about how clean slate ideologies are dangerous, and mentions in passing some crimes committed by the Soviet regime and the criticism which followed the collapse of Soviet Communism. Then she says:

The process has sparked heated debate around the world about how many of these atrocities stemmed from the ideology invoked, as opposed to its distortion by adherents like Stalin, Ceausescu, Mao and Pol Pot. “It was flesh-and-blood Communism that imposed wholesale repression, culminating in a state-sponsored reign of terror,” writes Stéphane Courtois, coauthor of the contentious Black Book of Communism. ‘Is the ideology itself blameless?’ Of course it is not. It doesn’t follow that all forms of Communism are inherently genocidal, as some have gleefully claimed, but it was certainly an interpretation of Communist theory that was doctrinaire, authoritarian, and contemptuous of pluralism that led to Stalin’s purges and to Mao’s reeducation camps. Authoritarian Communism is, and should be, forever tainted by those real-world laboratories. But what of the contemporary crusade to liberate world markets?

Klein claims that not all forms of market systems have to be inherently violent. They can potentially leave room for free health care and no “market fundamentalism.” She condemns “authoritarian interpretations” of Communism, but not necessarily Communism as such. Exactly where we can find examples of non-authoritarian Communism she doesn’t say. That’s as far as self-criticism has come on the Left a generation after we “won” the Cold War and “defeated” Socialism. 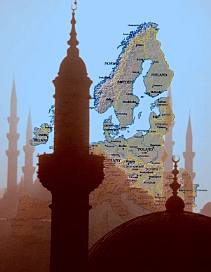 I have mentioned several times the possibility that we never won the Cold War as decisively as we should have done. The enemy has been regrouping and now largely controls our media and educational institutions less than a generation after the fall of the Berlin Wall. We did not have public trials against the supporters of Marxism just as we did against Nazism. That was a serious mistake, and it is of paramount importance that we do not repeat it. If or when the European Union collapses and Multiculturalism is defeated across the Western world, we need to stage public trials against the creators of Eurabia and the lies continuously told by our media and academia. They need to be exposed as evil and politically crushed.

This leads us to ask the following questions: Less than a generation after the fall of the totalitarian Soviet Union and its puppet regimes in Eastern Europe, we are watching the rise of the European Union, which is rapidly moving in a totalitarian direction in Western Europe. Some of the former Communist countries in Europe are now freer than their Western cousins, although this will soon change as they are indoctrinated by the EU. Is there a connection between the fall of the USSR and the rise of the EUSSR, as former Soviet dissident Vladimir Bukovksy has indicated? Have we entered the Cold War, part 2? I notice how many former Marxists now passionately support Multiculturalism and mass immigration, and listened to one prominent Communist “intellectual” in my country attack free speech as a concept a few days ago. Could the European Union ever have been a good idea, or was it flawed from its very inception? That’s something to ponder. I’m willing to consider the possibility that something “went wrong” with the EU at some point, but right now I’m leaning towards the conclusion that the EU has always been a flawed institution. Most of us just didn’t see it for what it was.
– – – – – – – – – 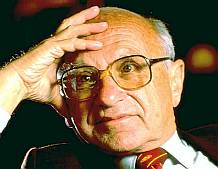 Lastly, I will focus on Milton Friedman, who along with F. Hayek is one of the villains of Klein’s book. According to her, Friedman has stated that “only a crisis — actual or perceived — produces real change. When that crisis occurs, the actions that are taken depend on the ideas that are lying around. That, I believe, is our basic function: to develop alternatives to existing policies, to keep them alive and available until the politically impossible becomes politically inevitable.” Friedman believes that during a crisis, we only have a brief window of opportunity before society slips back into the “tyranny of the status quo,” and that we need to use this opportunity or lose it.

This is actually very good advice, and it’s in my view the strategy Western survivalists should now follow. When I first started blogging I was concerned with how we could “fix the system.” I’ve gradually come to the conclusion that the system cannot be fixed, and perhaps shouldn’t be fixed. Not only does it have too many enemies, it also has too many internal contradictions. If we define the “system” as mass immigration from alien cultures, globalism, Multiculturalism and suppression of free speech in the name of “tolerance,” then this is going to collapse. It’s inevitable.

The goal of Western survivalists — and that’s what we are — should not be to “fix the system,” but to be mentally and physically prepared for its collapse, and to develop coherent answers to what went wrong and prepare to implement the necessary remedies when the time comes. We need to seize the window of opportunity, and in order to do so, we need to define clearly what we want to achieve.

What, exactly, is Western civilization? What went wrong with it, and how can we survive and regenerate as a vulnerable minority in an increasingly hostile world?

16 thoughts on “The Strategy of Western Survivalists”