A reader emailed us last night to explain who was really behind the referendum. It all goes back to 1986:

THE actions of a Kilkenny man secured the right for three million Irish citizens to vote on behalf of 500 million Europeans in today’s Lisbon Treaty referendum.

Raymond Crotty’s daughter Mary, and her sister Ann, who has returned from South Africa where she works as a journalist to campaign for a ‘No’ Vote, explained the pivotal action which their father took and which could now impact on the shape and direction Europe takes in the future.

Ireland is the only country in the EU where citizens are being allowed to vote on the adoption, or not, of the Lisbon Treaty European Constitution.

“We are being afforded this right, not because our government has secured it for us, but because our father, Raymond Crotty, took the Irish government to court back in 1986.

“The Supreme Court ruled in that case that in the event of any major change within the EU that impacted upon Ireland’s constitution, the government would be obliged to get approval for that change from the Irish people.

So despite the pressure from government, the media and the intelligentsia, the Irish people were allowed to vote their own minds. 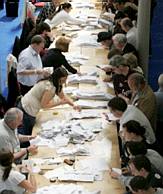 Not that anybody who was anybody believed the Irish people would turn on their masters. The bookmaker, Paddy Power, basing its decision on what people were saying at the exit polls, paid out £80,000 on “Yes” bets until reality started peaking from behind the media curtain, telling them otherwise. It’s always amazing to me that people believe exit polls – or phone polls, for that matter. Most of the people I’ve talked to say they deliberately mislead pollsters because they think it’s none of their darn business. This is especially true if the voter thinks the poll-taker doesn’t agree with them. In this case, where “no” was quite unpolitically correct, many of the voters would have dodged…and obviously did.

Now Friday the 13th means another £100,000.00 in accounts payable for Paddy Power. Believing what you read in the newspapers can be costly. Really, bookies ought to know better than to trust the MSM.

Meanwhile, campaigners for the No vote from both ends of the political spectrum are celebrating:
– – – – – – – – –

The founder of Libertas, Declan Ganley, who campaigned for a No vote, said: “The Irish people have rejected the Lisbon Treaty.”It is a great day for Irish democracy”, he added.

“This is democracy in action . . . and Europe needs to listen to the voice of the people,” Mr Ganley said. He added that the Taoiseach, Brian Cowen, “has a mandate to go back to Europe and do the best job possible”.

Socialist Party leader Joe Higgins has said the likely No vote to the Lisbon Treaty was a “huge rebuff to the political establishment” but a vindication of the rights of “tens of millions of workers” in the European Union.

Speaking in Dublin Castle, where final results of the counts will be announced later, Mr Higgins said he believed the No side had “won the argument”, despite the fact that the main political parties and “big business” were in favour of the treaty.

“This is not a disaster, which they have been trying to make out. In fact, this can be a rallying call for workers throughout Europe who have been at the brunt of this neoliberal juggernaut from the EU in terms of privatisation of services, attacking their pension rights, attacking the idea of a decent wage and a proper job.

Scroll down this page and see the graphic on the right outlining the voting by district. It may take a while for the colors to load, but you can scroll across each one to see how they voted. For example, County Wicklow was very close: 50.2% No vs. 49.8% for Yes. County Mayo, on the other hand, came in at 61.7 and 38.3, respectively.

Not all the votes have been counted yet, but that’s a mighty fine red map.

Let’s see how long it takes the EU to leave its treadmarks all over this vote.

Note: The links to the Irish Times will move behind the subscription wall in a few days.

23 thoughts on “Ireland to the Lisbon Treachery: NO THANKS”