This story is from April, but I just found it. No doubt our UK readers have read the account, but we Yanks haven’t been exposed to this bit o’ news from across the sea: 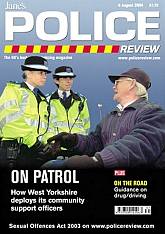 According to respected industry magazine, [Janes] Police Review, the plan – which affects all 31,000 serving officers in the Met, including Sir Ian Blair – is set to replace the unreliable Airwave radio system currently used to help monitor officer’s movements.

The new electronic tracking device – called the Automated Personal Location System (APLS) – means that officers will never be out of range of supervising officers.

But many serving officers fear being turned into “Robocops” – controlled by bosses who have not been out on the beat in years.

Not to put too fine a point on it, but some of Britain’s finest already fall into the Robocop mind-set, as I learned during my adventures with Lionheart.

According to service providers Telent, the new technology ‘will enable operators in the Service’s operations centres to identify the location of each police officer’ at any time they are on duty – whether overground or underground.

However, there is a good side to this for some: the company that the Police hired will need more watchers on hand. A boost for the economy with more jobs, why maybe even honest work for prisoners…
– – – – – – – – –
You see, if they were really smart, the police could outsource the job to incarcerated prisoners. Pay them ten cents an hour, set up some electronic gadgetry and they’d be all standing in line to do the work. Come to think of it, they’d probably do it for free.

Yeah, there might be a few glitches to be gotten round, but it would keep both sides engaged, so to speak.

In fact, any number of British citizens would cheerfully line up to volunteer for this task.

Although police chiefs say the new technology is about ‘improving officer safety’ and reacting to incidents more quickly, many rank and file believe it is just a Big Brother style system to keep tabs on them and make sure they don’t ‘doze off on duty’.

I thought “dozing off on duty” was a time-honoredhonoured tradition, but maybe I’ve just read too many British detective novels.

Some officers are concerned that the system – which will be able to pinpoint any of the 31,000 officers in the Met to within a few feet of their location – will put a complete end to community policing and leave officers purely at the beck and call of control room staff rather than reacting to members of the public on the ground.

That’s a valid concern, and this part of the system will probably have a steep learning curve for the watchers and the watchees. Nothing like a sadistic supervisor to make life hell. There must be some kind of Peter Principle at work here since quite frequently one does encounter sadists in supervisory positions.

Pete Smyth, chairman of the Met Police Federation, said: “This could be very good for officers’ safety but it could also involve an element of Big Brother.

“We need to look at it very carefully.”

One officer, working in Peckham, south London, said: “They are keeping the exact workings of the system very hush-hush at the moment – although it will be similar to the way criminals are electronically tagged. There will not be any choice about wearing one.

“We depend on our own ability and local knowledge to react to situations accordingly.

“Obviously we need the back up and information from control, but a lot of us feel that we will simply be used as machines, or robots, to do what we are told with little or no chance to put in anything ourselves.”

This is especially true for experienced, competent officers. On the other hand, police work in Britain appears to have become so degraded that this new move is simply another logical step down the Road of Good Intentions.

The system is one of the largest of its kind in the world, according to Telent, the company behind the technology, although neither the Met nor Telent would provide Police Review with any more information about exactly how the system will work or what sort of devices officers will wear.

I guess GPS simply isn’t good enough in the New Totalitarian State. No, they need implants.

8 thoughts on “First They Came for the Police”