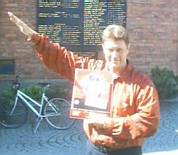 Last March I posted a video from the Finnish bad boy and self-promoter Seppo Lehto. As was pointed out by several commenters at the time, Mr. Lehto is not the most appealing poster child for freedom of expression.

Unfortunately, one can’t choose only the most noble and upstanding people as defendants in civil liberties cases. When it comes to the suppression of free speech, authorities are more likely to pick off the stragglers — the unpopular, unpleasant, and unattractive media personalities who inhabit the fringes of public discourse.

Seppo Lehto is one such character, and now he has just been convicted and sentenced for inciting ethnic hatred. He will spend more than two years in prison for posting his noxious opinions on his blog.

In many ways, Finland is leading the way in the repression of free speech. Britain generates more cases, but the Finns have been prosecuting theirs more effectively and imposing harsher punishments.

Vasarahammer reports the news in English on his blog:

Notorious hatemonger and self-styled historian Seppo Lehto was sentenced to two years and four months imprisonment in Tampere District Court Thursday 30th of May 2008. Lehto was charged with nine counts of gross defamation, inciting ethnic hatred and inciting religious hatred. Lehto had previously served a suspended sentence for defamation and was under probation, which means that his three month sentence will become mandatory. The total mandatory sentence will be two years and four months, which is by far the harshest sentence ever for a “Freedom of Speech crime” in Finnish legal history. The full verdict can be read in Finnish here.

Outside Finland Lehto is perhaps best known from his Youtube video, in which he draws a cartoon of muslim prophet Muhammad. The video was withdrawn from Youtube but has later been republished there as well as in other online video sites. However, in his home country he has become notorious for his numerous ‘filth blogs’ containing explicit racist insults illustrated with manipulated pornographic images and Patrioottiradio podcast radio site, which he used to hurl racist insults to politicians, civil servants and members of ethnic and religious minorities.

Lehto has been an Finland’s number one internet pest for years and it is very hard to feel sympathy for him based on the content of his numerous filth blogs. It is possible that he is the main reason behind former Minority Ombudsman Mikko Puumalainen’s jihad against racism in the internet and Mika Illman’s aggressive prosecution in cases involving the internet. Conviction of Lehto is perhaps Illman’s biggest coup to date and has provoked cheers from members of Finnish political elite. Former Foreign Minister Erkki Tuomioja expressed his satisfaction about the verdict in his website.

What has made some people, including me, suspicious, is the fact that he managed to include the charge of ethnic and religious hatred in the trial. Last time anybody was convicted of insulting religious feelings (blasphemy) in Finland was during the 1960’s. Artist Harro Koskinen’s painting Sikamessias (Pig Messiah) was considered to be blapshemous and the artist was force to pay a fine for the offence. The successful conviction of Lehto for inciting religious hatred may lead to prosecution of other bloggers publishing material deemed offensive to muslims.

As far as I know this was the first time anybody was convicted for insulting muslim religious feelings in Finland.

Repression is appearing all over Europe like the skim of ice on a cold pond. A few small patches form simultaneously in different places, and then enlarge and spread until the whole surface is frozen solid.

There are too many cases now for me to list them all. Until recently I tried to keep track — Paul Belien, Dahn Pettersson, Mikko Ellilä, Lionheart, Codie Stott, and others — but the numbers have become too great. In Britain alone there so many examples of repression that monitoring them is a full time job.

The lights are definitely going out all over Europe.