Life in Italy has this report: 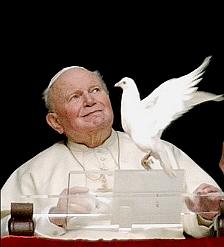 Pope John Paul II could take a crucial step towards sainthood some time during the next 12 months, the Catholic news agency SIR reported on Tuesday.

The agency quoted remarks by Monsignor Slawomir Oder, who is heading the campaign to get the Polish pontiff canonized. According to Oder, John Paul II could be beatified ‘‘by the end of spring 2009’’.

Oder’s remarks indicate the beatification, which has already been fast-tracked, will probably not take place on October 16 of this year. There had been speculation this date would be chosen to coincide with the 30th anniversary of John Paul’s election as pope.

Beatification is the intermediate stage on the way to being declared a saint. It means that someone can be called ‘Blessed’ [pronounced “bless-éd” – D.] and that the person can be venerated by Catholics in the place where he or she lived.

The Church took the first step in the beatification process in April 2007, during a mass marking two years since the death of John Paul II.

A weighty dossier of ‘evidence’ of John Paul’s holiness, gathered by the Rome diocese and the Polish diocese of Krakow from which he came, was formally handed over at the mass.

Cardinal Camillo Ruini, the head of the Rome diocese and a longtime aide to the former pontiff, officially closed the first phase of the process with a Latin rite [?Mass].

Also present was a French nun whose inexplicable recovery from Parkinson’s disease, after she prayed to John Paul, is likely to be certified as the miracle that will qualify him for beatification.

[So where are they hiding the Devil’s Advocate in this procedure? It’s certainly not a enviable job, but it is part of the process, codified for centuries]
– – – – – – – – –
John Paul is still some way from beatification because his ‘‘heroic virtue’’ must be approved by theologians, historians and cardinals at the Vatican’s Congregation for the Causes of Saints.

Over the last three years, officials leading the campaign for beatification have gathered information on John Paul’s life, collected all his writings and heard testimony from some 130 people who knew him.

All the information has been condensed into a single document that will be examined by the three panels at the Congregation.

After beatification, another miracle is required before someone can be declared a saint, and officially venerated by Catholics everywhere.

New reports of miracles attributed to John Paul’s heavenly intervention are said to arrive in Rome every week. During John Paul’s funeral in 2005, crowds held up placards saying ‘Santo Subito!’, calling for the Polish pope to be declared a saint without going through the normal procedures.

Pope Benedict XVI has already accelerated procedures for his predecessor, waiving a rule that says the process cannot begin until at least five years have passed after the candidate’s death.

John Paul’s ‘cause’ was opened three months after his death.

This speedy path to canonization is an interesting turn of events. It has several possible motives. One might be to declare him the Patron Saint of the EU. That might bend a few noses in Brussels.