Last night I took a road trip up to Washington D.C. to attend a party given by Diana West for Andy Bostom to celebrate the publication of his new book, The Legacy of Islamic Antisemitism. I brought along our copy of his earlier book, The Legacy of Jihad — which has been a gold mine of original source material on Islam for me and Dymphna — and not only did Andy sign it, but I also got a signed copy of his new book. In addition I took along a copy of Diana’s book, The Death of the Grown-up, and asked her to sign it.

So I came home with an armload of celebrity autographs.

The party was a relaxed and informal affair, with a mix of people from journalism, academia, and politics. Some of the guests I had met before; others were new to me. What we all had in common was a strong interest in various aspects of the Counterjihad.

An honored guest was Steve Coughlin, who was fired from his job in the Pentagon in January for daring to point out the penetration of the United States government, including the Pentagon, by front groups of the Muslim Brotherhood.

Below is a photo of (left to right) Andy Bostom, Steve Coughlin, and Jeffrey Imm of the the Counterterrorism Blog. The latter was wearing an excellent tie — not clearly visible in the photo — made up of American flags. 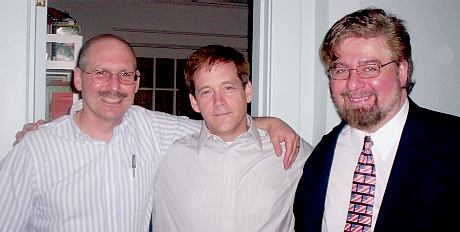 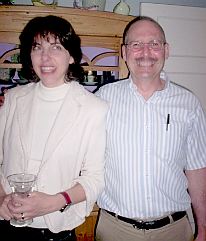 In the photo at right are Diana West and Andy Bostom.

For several hours the discussion among different groups of people ranged across a variety of topics, including the history of jihad, the delusion that reforming Islam is possible, military affairs, the upcoming election, Ted Kennedy’s health, and inside-the-Beltway politics. I spent a fascinating time in conversation with a well-known historian about World War Two, General McArthur, George McGovern, and Jimmy Carter, among other things.

It was a most pleasant evening, and well worth the drive.

I used to be from D.C.
But they don’t want no more of me

Still, it’s fun to go back for a visit from time to time.

17 thoughts on “A Book Party for Andrew Bostom”