This is a report from our Spanish correspondent AMDG. It was posted first on his blog; refer to the original post for links to Spanish-language sources.

This is just the latest case: Two villages in the province of Malaga will remove from their coat of arms the chain that Boabdil wears around his neck, which shows he was subjugated, not captive, by the Catholic Kings after taking over the last remnant of al-Andalus: the Kingdom of Granada. The villages are Canillas de Aceituno (2,336 inhabitants) and Sedella (688 inhabitants).

The mayor of Canillas de Aceituno, Jose Manuel Aranda (PSOE), says that he has taken this decision because the chain “represents an element of confrontation that now belongs to the past”. He adds in a pompous and confusing sentence: “We have decided to remove a symbol with connotations of racism and slavery that deepens the struggle for dominion among races, senseless in a new, free generation”.

The decision was formalized last Friday in an extraordinary plenary meeting. The proposal originated with the party ruling the city council (PSOE) and was supported by the Andalusian Party; the Popular Party voted against it.

“We do not understand how they can vote against and be in favour of continuing to use for Canillas de Aceituno symbols that are the hallmark of inequalities and that can raise xenophobic sentiments”, commented the alderman. 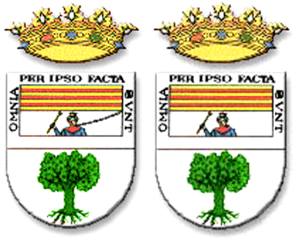 That is the shield before and after: Boabdil has been promoted from subject to king by removing the chain. I think this is opening Pandora’s Box.
– – – – – – – – –

It is not the first case. In 2006, the regional parliament of Aragon started the process to remove the “Moors’ heads” from its coat of arms. The heads represent the conquest of Huesca in 1096. This was the first relatively big village that the King of Aragon was able to seize, in spite of being well protected by its remarkable walls. It allowed the Kings of Aragon to leave the Pyrenees and to expand their dominions to the south; a prelude to the annexation, shortly thereafter, of the fertile lands of the Ebro Valley and its rich cities.

For the time being the Moors’ heads are still in the coat of arms, separated by St. George’s Cross.

Moors’ heads are a rather common heraldic feature. Or at least they have been common up until, now. For instance, Pope Benedict XVI has also one of those Moors’ heads in his coat of arms. In this case it is not a defeated Moor, but a pre-Islamic Moor. An opportune reminder that Moors were Christians before being invaded by the Mohammedan Arabs.