Commenter Babs sent this email the other day about her trip to California to help with the packaging of boxes of goodies to be sent to the deployed military.

She made the experience sound so satisfying I asked if she could find some photos to go with her story. She contacted the Operation Gratitude Staff, who supplied the images below. All of them were taken by Bernard Falkin.

I got back last night from the packaging drive for Operation Gratitude and still feel so overwhelmed. It was an amazing experience.

OpGrat packaging is based at the Army National Guard Armory in Van Nuys, California. One whole side of the parking lot is filled with products ready to be packaged and shipped out to troops, sitting there in pallets and bins. 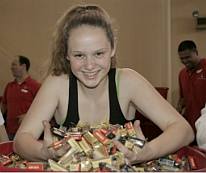 There were hundreds of people there, already at work.

My twenty-one year old son, Nick, and I went out courtesy of my husband’s zillion airline miles. We worked the line both Saturday and Sunday.

On Saturday we shipped out 6,000 boxes, each individually addressed to a soldier/sailor/marine in the field. I chucked 6,000 handfuls of cough drops on Saturday! On Sunday my son Nick and I, along with a man named Carlos, made up a team and rotated jobs.

The hardest job was getting the clothing, tee shirts, cool vests (which were interesting; they are vests with some kind of polymer beads in them that keep you cool), bandanas, visors or socks into the box. The next hardest job was being a “pusher” on the other side of the line, shepherding the boxes up the assembly line, and the easiest job was chucking two chapsticks into each box. We traded off.

Everyone wants to know what were in the boxes. Well, each box contained over fifty different items! Every kind of a snack food from raisins and nuts to cracker jacks, See’s candy and Girl Scout cookies went in to the boxes. Personal hygiene articles, from shampoo and moisturizer to lip balm and foot powder were included. Powdered drink mix, DVD’s, CD’s, phone cards, some even had cigarettes. (I told everyone that I would throw extra cough drops into the boxes with the cigarettes!) A huge assortment of high energy drinks were on the assembly line, including some type of thing that you place under your tongue for high energy called “cherry bombs”.

This is a complicated process and, the people doing it are experts at putting it together. I have the greatest respect for the “core” of this operation, but also for the just plain folks I met from all walks of life — all of us showing up to help the troops. There were Boy Scouts, Girl Scouts and volunteers from corporate organizations (like the Disney volunteers and Target stores) who came out to help. And then there were the many people that showed up in ones and twos. They’d heard about this packaging drive and simply came to help because I think they needed to. They needed to be part of something that directly aided our troops in the field…

That brings me to the founder of Operation Gratitude. She started this organization in her living room. She is universally loved by each and every person I talked to. 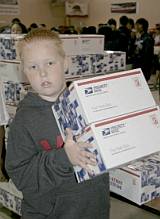 People are grateful that she has given them an opportunity to do what they could not do by themselves – that is – to support our troops with their time and resources. She is the person responsible for giving them an outlet to express their appreciation to our military, an outlet they would not have otherwise.

Believe me when I say that every box coming off that assembly line was filled to the brim with love and hope for a safe return.

In closing, I will add that I got way more than I donated this past weekend. The sweat I put into those boxes was more than a thousand times returned to me in spiritual well being. Knowing that someone, somewhere will open that box and have a smile. Someone – actually a whole lot of someones – thought about this soldier holding his box of goodies and the pleasure it would bring.

Those soldiers will open a box filled with the thought, effort, and love of the people they fight for.

It really was amazing.

Do your part: write some letters, donate money for the boxes and mailing costs. OperationGratitude