Operation Gratitude is in full gear for its May collection of items for our military:

“….everytime we see a school child draw a picture, or just get a note from Americans who really support us, it is a morale booster. Thank you again for taking the time to send a piece of home. Sincerely, MAJ T….” 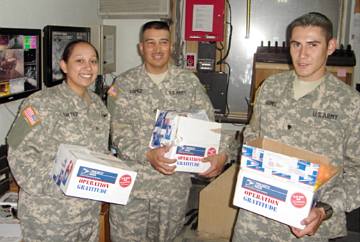 So what kinds of things do they need? Let’s start with the basics:

WE NEED FINANCIAL DONATIONS TO COVER THE COSTS OF
SHIPPING AND COMMUNICATION: $10 perpackage

They have Pay Pal, but if you send a check, they get to retain more of the proceeds. Here is the mailing address:

Don’t have any money? Try your hand at that forgotten skill, letter writing:

Write Letters to be included in the care packages. U.S. service members deployed for long periods away from home love nothing more than to receive good wishes and words of appreciation and support, especially from total strangers. OPERATION GRATITUDE strives to include several personal letters in every package that we send. Help ensure that a soldier, sailor, marine or airman knows that you are thinking of them by writing cards or letters. Please include your own address or email in the body of each letter so the recipient can choose to write back. Sample salutations include: Dear Service Member, Dear Hero, Dear Brave One, etc. Please keep your message upbeat and positive. Please do not put individual letters in sealed envelopes; all letters are subject to review.

Please understand that OPERATION GRATITUDE is not at liberty to provide or disclose the names and addresses of service members.

We accept letters all year.

Here’s the May newsletter, with important details on how you can help:

Throughout the month of May, designated by Congress as Military Appreciation Month, Operation Gratitude will prepare and ship tens of thousands of care packages to U.S. Troops deployed in Iraq, Afghanistan and on ships at sea. Working 7 days a week all month, the tireless volunteers will sort, inspect and organize the millions of donated items to ready them for two energy-filled weekends of Assembly Line action on May 17-18 and May 24-25.

“This will be the fastest paced Care Package Drive we have ever undertaken” declared Charlie Othold, Director of Operations. “We only have two weekends of Prep Work and two weekends of Assembling, but we will get a package shipped to every service member whose name we receive” he promised.

More than 500 Volunteers flocked to the Armory during “Big Sunday Weekend,” May 3-4, as part of this renowned Los Angeles City-Wide volunteerism event. The amazing efforts of the dedicated crowd ensured that the Operation Gratitude volunteers will be able to accomplish Othold’s goal by the end of May.

In observance of Memorial Day on Saturday May 24, the organization will pay tribute to Wounded Warriors with a screening of the documentary “Warriors…in their own Words” trailer. On the same day, Operation Gratitude will celebrate the shipment of its 350,000th Care Package, the contents of which will remain a secret until the moment the box hits the Assembly Line! The last three milestone Operation Gratitude Care Packages contained the keys to new Dodge or Jeep vehicles.

Stung by the recent Postal Service rate increase of ~10%, Bill Van Trump, Development Director, is encouraging supporters to donate funds to pay postage costs, rather than purchase items for the packages. “We have been extremely fortunate to receive very generous product donations from our Corporate Sponsors this year” explained Van Trump. “Our biggest needs now are funds and personal hand-written letters.”

Operation Gratitude also provides for those who would like to honor someone’s memory:

If you would like to make a donation in someone’s honor or memory, please include the name and address of the person you would like notified (in the “Message” field if donating by Paypal or on a note if sending a check) and we will mail a beautiful tribute letter to them; donors will receive a letter of acknowledgment for tax purposes.

Sadly, making a donation in someone’s honor will be my choice this time.
– – – – – – – – –
One of our local fellows, from Prince Edward County, VA, was killed in action on April 22nd. Here’s the report from the LA Times:

Two young Marines killed in the explosion of a suicide vehicle are being praised for saving the lives of dozens of Marines and Iraqi police by preventing the vehicle from penetrating a police compound in Ramadi.

Lance Cpl. Jordan C. Haerter (above) and Cpl. Jonathan T. Yale [from Burkeville, VA] were standing guard early Tuesday morning when a blue dump truck packed with 2,000 pounds of explosives came speeding toward the compound. The two quickly went through the “escalation of force” procedures: waving their arms, shouting and shooting flares.

When the truck refused to stop, Haerter and Yale stood in its path and opened fire. The truck rolled to a stop about 30 feet from the entry point and exploded, spreading destruction about 130 feet in all directions, demolishing a mosque and injuring 20 Iraqi civilians.

Haerter, 19, of Sag Harbor, N.Y., was killed instantly. Yale, 21, of Burkeville, Va., died moments later. Both were from the 2nd Marine Expeditionary Force, based at Camp Lejeune, N.C.

An official after-action report says the two acted without hesitation or concern for their own lives and saved the lives of 33 Marines and 21 Iraqi police inside the compound:

“Recognizing the danger to their fellow Marines and partnered Iraqi police, Cpl. Yale and Lance Cpl. Haerter fearlessly gave their lives in their defense.”

Update 5/11/08: Haerter and Yale have been nominated by Marines to receive the Silver Star for combat bravery.

Yeah, I know…it won’t return the Yales’ son to them, but the living need to honor their dead heroes if the country is to continue to exist.