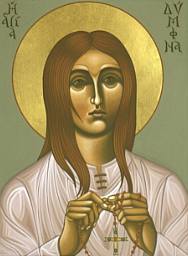 Saint Dymphna’s feast day has rolled around again. May 15th seems to sneak up on me…

The iconographer who did this image is a Jesuit. Here is Father McNichol’s version of her story:

Saint Dymphna was born in the seventh century. Her father, Damon, a chieftain of great wealth and power, was a pagan. Her mother was a very beautiful and devout Christian.

Dymphna was fourteen when her mother died. After his wife’s death, Damon is said to have been afflicted with a mental illness, brought on by his grief and because Dymphna resembled her mother, he conceived a passion for his daughter. He sent messengers throughout his own and other lands to find some woman of noble birth, resembling his wife, who would be willing to marry him. When none could be found his evil advisers told him to marry his own daughter. Dymphna fled from the castle together with Saint Gerebemus, her chaplain, and two other friends. They settled at Gheel, near the Belgian city of Antwerp, where Dymphna devoted herself to helping the poor and the sick.

Damon found them in Belgium, tracing them through coins spent on their journey. When Dymphna continued to reject the unnatural marriage, her father gave orders that Gerebemus’ head be cut off. He tried to persuade his daughter to return to Ireland with him. When she refused, he drew his sword and struck off her head. She was then only fifteen years of age.

Dymphna received the crown of martyrdom in defense of her purity about the year 620. She is the patron of those suffering from nervous and mental afflictions. Many miracles have taken place at her shrine, built on the spot where she was buried in Gheel, Belgium, where her blood was shed. Cures for madness and epilepsy were attributed to Dymphna’s intercession and in the thirteenth century the bishop of Cambrai commissioned a “Life of Dymphna” which drew on oral tradition. Local people also discovered two marble tombs which they believed angels had brought in honor of the saints.

Today she is Belgium’s patron saint of the insane, and for centuries Gheel has been noted for the care and treatment of the mentally ill.

There are other pages of his work to see here. This is an amazingly productive artist. If you like ikons done in the Greek Orthodox style, he’s your man.

Father Creighton talks about the bar and grill, St. Dymphna’s Pub, in New York City. It seems a number of others have been there also, including this man.

One of the most difficult, but exciting adventures while wandering the streets of New York City is finding a bathroom but this leads into some exciting surprises. In 1997, I was walking down the exotic St. Mark’s Place, on the lower east side, which has the flavor of a counter-cultural fashion show and parade. Looking for a bathroom, I saw an old-fashioned wooden pub sign about a block away that said St. Dymphna’s Pub and Restaurant…

Inside, behind the bar, where all kinds of holy cards and pictures of St. Dymphna. I decided to engage the Irishman who was the owner, in conversation.

I asked him if he knew the story of St. Dymphna and if he knew that she was the Patroness of the Mentally Afflicted, And he said, “Yes of course”.

And I said, “Why did you name this pub after her?”

And he said, “Have you looked outside?”

One of the reasons that saints like Gemma, Benedict Joseph Labré, and Dymphna are so popular today is that there is a great escalation of mental suffering today as we all try unsuccessfully to make sense out of utter the confusion and madness and violence that we are asked to live in. At some time or other we all go through a time which resembles a psychic break because the soul can never adapt to lies or insanity.

This icon is lovingly dedicated to St. Dymphna’s Pub and all the little islands out there which provide comfort for shattered pilgrims.

Yes, especially when those islands of comfort serve beer on tap and are known for their real Irish breakfasts the morning after.