Update: Our Austrian correspondent sends additional background for my report:

One note on the begging women:

They are Roma, forced into begging by gangs. However, as of June 1st, begging with children is no longer allowed and will be punishable according to the law. Begging as such is not illegal in Vienna, the hub of Austrian socialism.

Take a close look at the photo below and see if it seems familiar:

The image on our blog’s masthead was painted by Canaletto (Giovanni Antonio Canal) in the mid-18th century. During the three-quarters of a century since the end of the second siege of Vienna, much construction had occurred outside the old city walls, and all of the buildings in the near distance in the painting had been built since 1683.

As you can see from the photo, even more building has occurred in the subsequent two and a half centuries. The line of trees on the left obscures half the landscape, but I know that the reflecting pool has disappeared and been replaced with more streets and buildings. 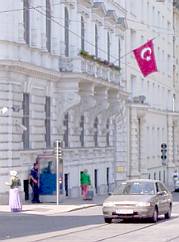 In fact, the Turkish embassy (shown at the left) is situated approximately at the location of the old lake. When we walked towards the Belvedere Palace on the opposite side of the street, the armed guard seemed to be watching us carefully. I stopped a short distance away and waited until he wasn’t looking before I took the photo.

I stayed in Vienna an extra day to see the sights, and was fortunate to have as my guide one of the Swedish participants in the Counterjihad conference (I’ll call him “Sven”), who studied for a while in Vienna and speaks German. 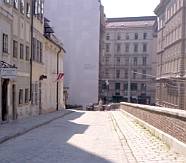 The space immediately behind the wall was backfilled with earth and rubble, and on the artificially elevated area houses and streets have been built. Included in those houses is one that Beethoven lived in, and also the “Schubert Café”.

Needless to say, Mozart, Strauss, Beethoven, and countless other composers are featured everywhere across the city. While I was there I attended a performance of The Magic Flute at the Vienna State Opera, which was the treat of a lifetime. We sat in box with a good view of the stage and the orchestra pit, and I was rapt throughout — there’s nothing like Mozart played in his home territory.

The opera building is a gorgeous example of Baroque revival architecture, with a magnificently gilded and florid interior unlike any I’ve ever seen. 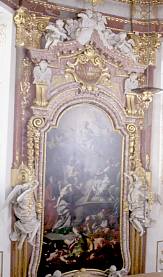 The architectural decoration throughout the city is astonishing in its variety and ubiquity — it seems as if any building constructed before 1930 is covered with elaborate ornamentation. Gothic, Renaissance, Baroque, Empire, Fin de Siècle, Baroque Revival, High Modern, and Deco: wherever you look, all styles are represented in the pillars, pediments, facades, balustrades, towers, gargoyles, and gateways.

The Belvedere Palace (from which vantage point both Canaletto’s painting and the photo were taken) is not just a magnificent specimen of Baroque architecture, but also houses a fine collection of late 19th and early 20th century art. The Gustav Klimt pieces are, of course, the main attraction: the building houses The Kiss and other well-know works by Klimt. But there were several Klimts I had never seen before, including a striking impressionist portrait of a woman, painted during his early period, and one of his last paintings, a luminous piece entitled Adam and Eve. 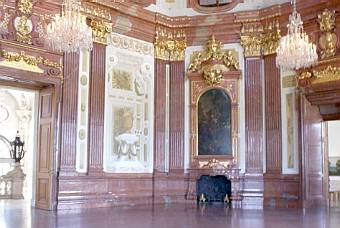 Also in the collection were Austrian impressionists, a Van Gogh, two Monets (one of which I had never seen), an Austrian pointillist, and a number of fine Fin de Siècle works. The statuary was less interesting, but the interior décor offered a wealth of eye candy for those whose taste runs to the Baroque.

In stark contrast was the Soviet war memorial, down the hill from the Belvedere and not far from where the far side of the reflecting pool would be.

According to Sven, there has been much debate in Vienna about the Soviet memorial, whether it is an inappropriate civic monument and should be pulled down. Apparently the city has decided to keep it — or perhaps the cost of removing it would be too great — because it still stands as a model of proletarian realism.

Sven led me to many other places I never would have found on my own — the Secessionist Exhibition, the Imperial Hotel (which housed American military officers after World War Two), Freud’s favorite café, and numerous sights on the Hofburg. By moving quickly and not stopping too many times we covered a lot of territory.

The evening before I flew home I took the U-Bahn down to the Danube so I could stroll along the promenade, watch the swans, and enjoy the mild spring weather. When I returned to the station to take the train back to my hotel, I passed a woman sitting in the corner of the landing on the stairs up to the platform. She was wearing a headscarf — whether Turkish or Romany, I couldn’t tell — and was clutching a small child. She held out her hand towards the passersby, begging for money and murmuring in a low voice using a language I couldn’t identify.

When I reached the platform, I realized that I was on the eastbound rather than the westbound side, so I returned down the stairs and crossed the lobby to an identical stairway up to the other platform.

On the landing halfway up the stairs was what seemed to be an identical woman holding an identical child in the same position and muttering in an identical voice with outstretched hand. For a moment I was confused — had I somehow become disoriented and gone back up the same stairway as before?

However, when I reach the platform I was on the westbound side, and everything was just as it should have been.

While boarding the train, I wondered if there were carbon copies of the same woman and child on all the stairways of every U-Bahn station in the city, each reaching out her hand and begging for spare change in the same tireless and timeless monotone.

My next post will address the substance of Counterjihad Vienna 2008.