Back in the mid-1970s, when I was but a wee sprout of a computer programmer, I worked for a company in the aerospace business in the heart of Washington D.C. For the sake of this post I’ll call it Worldwide Engineering Systems (not its real name).

The top managers and officers at WES were all retired USAF veterans. They came out of the service and — like so many others in the K Street canyon — went through the revolving door to form one of the quasi-private barnacles that fasten upon the ample pilings of the federal government. 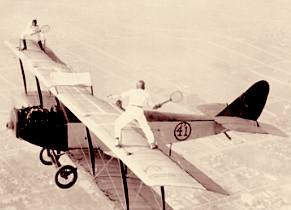 After oil prices skyrocketed in the mid-seventies, WES and similar companies found a lucrative market in Iran and the Arab countries of the Persian Gulf. The sheikhs had a lot of money, and were keen to spend it on upgrading their military equipment, particularly their aircraft and related systems. WES fell into a specialized niche: they built and equipped air traffic control systems, trained the end-users, and signed maintenance contracts to keep the hardware in working order.

The flyboys who had been stationed in Saudi or Iran left the service to work at WES and returned to their former stomping grounds overseas. They parlayed their local contacts and their connections with the aerospace industry into hefty contracts for the company. At the air bases in the desert, WES laid the tarmac, erected buildings, installed the radar, and set up other equipment, all in order that the wastrel sons of Arab princes could play at being pilots and fly the most recent USAF surplus fighter jets.

But WES didn’t rely solely on air traffic control for its livelihood; it tackled anything that related to military aircraft. Midway through my tenure with the company, it snagged a fat contract with the Shah of Iran to supply spare parts for his air force.

Worldwide Engineering Systems consistently went out on a limb to do business in the Persian Gulf. Its clients were rich, but they weren’t the genteel First World customers that one did business with in Europe or North America. After a system was delivered to the local sheikhs, it was touch and go whether the company got paid. The fact that the Arabs were wealthy didn’t always mean that they had ample liquid reserves — their capital might well be tied up in long term debentures, or Parisian real estate, or Rolls Royces and call girls in London.
– – – – – – – – –
Getting paid for a completed contract was always a dicey business. The preferred method for getting a WES client to pay up was to offer a new deal, one that was so enticing that the client could be induced to write a check for the previous project before accepting the new delivery.

That was the impetus behind the Iranian spare parts project. The Shah held on a little too tightly to his procurement purse strings, and the marketing guys at WES figured the best way to loosen his grip was to make him an offer for spare parts that he couldn’t refuse.

At the time I was programming for the company in FORTRAN on an old IBM-370 mainframe. Most of my work was accounting and payroll, but every now and then some other project would come across my desk.

The spare parts project started out as a huge stack of photocopied parts lists, with each item listed separately: part number, description, number of items needed, cost, price, and — most importantly — the expected life of the part.

The lifetime of the parts was significant, because the company was designing a three-year parts inventory for the Shah — that is, the spare parts would supply the covered systems for three years of continuous use. The statistically projected failure time for a part told us how many of that part would have to be included.

The data entry operator punched up all the information on cards (yes, it was that long ago), the cards were read, and the data were stored on a disk drive attached to the 370 system. It was my job, as a lowly programmer, to write the code that would crunch the numbers and give the sales rep the total amount for the entire system.

The problem was this: the marketing boys had given the Shah a particular dollar amount for the whole deal, and business necessity required the system to stay within that limit.

The first pass through the data came out way over budget, so instructions came down from on high to (shh! don’t tell anybody!) change the parameter for the run to specify a two-year lifetime for the parts, instead of three years.

But even that did not bring costs down far enough. The night before the sales rep was to fly out to Tehran, he went through the whole printout and marked which parts could be knocked down to a year and a half, or even a year. The card punch guy and I worked late, made the final run, and the rep went off to see the Shah in the morning with a suitcase full of green bar and whatever cover story management had cooked up about what they were actually selling him.

Unfortunately, the spare parts deal didn’t save WES. The Shah never did pay his earlier bill, so the company eventually filed for Chapter 11 and went into receivership. I was dissatisfied in my job and quit literally two weeks before everyone but the accountants was laid off, so I missed out on all my unemployment benefits.

This was a couple of years before the Shah was overthrown, so it wasn’t the Islamic revolution that did in WES. It was the reluctance of Iran — and Kuwait and Saudi Arabia, too — to pay their bills.

When the Gulf War came around in 1991 and Saddam ordered all those air force planes flown to Iran to keep them safe, I thought about the Shah’s spare parts.

After all, there had been an embargo on military parts for the mullahs in place since 1979. Since the parts on those planes disappeared faster than would have been expected (“Those cursed Americans! Why did these altimeters fail so soon?”), the Iranians must have been hungry for spare parts.

I could picture the technicians out there on the runways in the desert airfields, poking around in the bellies of the Iraqi planes looking for useful equipment.

Yes, all of those planes were MiGs and other Soviet aircraft, but still… There must have been something there that they could use.

Anyway, it makes a nice story.

So… Whenever you read about the Russians selling jets to Iran, ask yourself:

How may years worth of spare parts did they claim to be supplying?

And how many did the mullahs actually get?