Full hijab has proved useful to members of Al Qaeda and other terrorist groups, who have occasionally eluded capture by going undercover in a burkha and slipping the dragnet.

Lately crimes committed by perpetrators wearing a burkha as a disguise are becoming more commonplace. We’ve had a few such incidents here in the States, and there are even more in Europe. 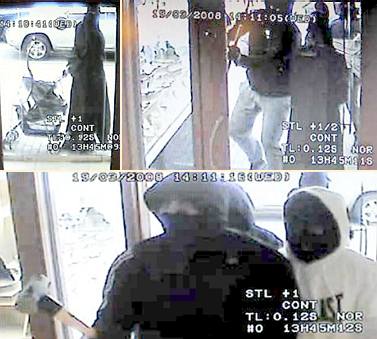 The latest one in Britain occurred in Birmingham last week. According to AlArabiya.net:

British police are searching for a 6ft 6in armed robber who robbed a jewelry store disguised as a Muslim woman wearing a burkha and pushing an empty pram, British press reported Saturday.

The man acted as a decoy in order to be buzzed into the highly secured “Friends Jewellers” in Cape Hill near Birmingham. Once he was in he was quickly followed by four men wearing hoods with their faces covered who began to hammer down a second security door.

The thieves reportedly sprayed the terrified shop owner and his brother and two security guards with pepper spray before fleeing the scene.

The gang, believed to be British-Asian’s, are being hunted by the police.

“British-Asians” is the customary official code phrase for Pakistani immigrants or their descendants in Britain; no reader would ever imagine Japanese or Thais when picturing the possible culprits.

There were more details the Sunday Mercury, quoting the owner of the store:

“It’s very fortunate nobody was hurt because they threw a claw hammer at my head, which missed, and sprayed me in the face with pepper spray and used lump hammers.

“They are very organised and they blocked off the road to aid the escape, they knew what they were doing.”

How unusual is this? Is it an isolated incident?

The Sun quoted local councilor Keith Davies as saying: “It’s the first time I’ve heard of anything like this. It’s worrying.”

Now it has emerged that a would-be robber dressed in an all-covering black burkha was involved in a separate robbery.

Police said he approached the lone driver of a Securicor van, outside the busy Fox and Goose Shopping Centre in Washwood Heath Road at 1.15pm on Friday, March 14, and threatened him with a 14in firearm wrapped in a black plastic bag.

The terrified driver managed to get inside his van and shut the sliding door, trapping the suspected weapon in the van door for a few seconds.

There was a brief struggle before the robber eventually released the weapon and the driver managed to escape.

The offender ran into a dark coloured Ford Focus, which was parked outside the post office in the Fox and Goose Shopping Centre car park which was driven off down Bromford Lane.

And the owner of the jewelry store seems to take it as a given that there have been even more crimes of this type:

Raj Kumar, 40, who runs Friends Jewellers, said: “They obviously use the burkha and pram disguise to catch you off-guard. I had been halfexpecting something like this because all the shop owners talk to each other and there have been three others in Birmingham recently, with the same Audi used in two of them.”

In all the recent cases in Western countries where women wearing burkhas were denied admittance — to businesses, buses, courtrooms, etc. — the issue has been framed in terms of human rights, as a matter of religious freedom.

Once Muslim activists get the battle framed in such terms, they are more than likely to win: women have a right to be free, and that freedom includes the privilege of wearing a head-to-toe garment which completely obscures the identity of the wearer.

However, like so many counterjihad issues that tie Western jurisprudence in knots, the matter is easier to dispose of if it is reframed as a security issue.

The wearing of burkhas in public manifestly increases the incidence of crime and allows the criminals to escape punishment more readily.

Public safety trumps the right of any individual to go about in public totally disguised.

People have a right to conduct their business unmolested by masked marauders. The burkha is out. Case closed.

5 thoughts on “A Burkha-Shrouded Giant”