Here’s a report from our expatriate Dutch correspondent, H. Numan, on the current controversy in the Netherlands over Geert Wilders’ movie.

Notice that in the photo of the demo the slick expensively-produced protest sign carried by the demonstrator has the word “western” spelled wrong. Heh.

Update: A Dutch reader sent us an email this morning with two corrections.

I read H.Numan’s really excellent post “Fitna: The Left Paints Itself into a Corner”, but noticed two minor flaws. Not that important, but maybe handy to know.

Firstly, concerning the sign: The sign reads “Wilder’s Westen”, which in Dutch means: “The West according to Wilders”.

The mistake about the sign is mine. But it’s very confusing — I didn’t know that the Dutch language ever used an apostrophe like that, especially after a word ending in “s” — I thought that peculiarity was unique to English. Also, the lower part of the sign is in English, so it seemed unlikely that the top was in Dutch.

But I bow to an informed correction.

Secondly, concerning the kort geding, It is not the NMO, but the “Nederlandse Islamitische Federatie” (NIF) [Dutch Islamic Federation] that is filing the lawsuit. 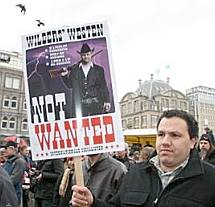 Yesterday, the IS (International Socialists) hosted a demonstration on the Dam in Amsterdam. Nederland bekend kleur (translated: “The Netherlands admits color”). This demo was supposed to show solidarity with ethnic minorities, but in actuality it was a ‘let’s bash Wilders in public’ demo.

It was a complete fizzle. At least 5,000 demonstrators were expected. Less than a thousand showed up. The national media weren’t even present.

IS went full blast: they invited everybody remotely important, and 50 VIP’s were silly enough to be present. Many of them are known left-wing politicians or wannabes: Ed van Thijn (PvdA), Mrs. Groenteman (left-wing wannabe), but also Hans Dijkstal, a man who should have known much better. Dijkstal is a VVD politician, not exactly somebody you’d expect to be present in Trotskyite demonstration. However, Dijkstal represents the ultra left wing of the VVD, so his presence together with former party leader Ed Nijpels is not that unusual. Also because both Dijkstal and Nijpels are now retired politicians. Anything to get into the limelight!

Rather unusual: no sitting parliamentarian attended this demonstration. Not even Groen Links or the Socialist Party. The reason: the parliament found unanimously that this demonstration was a direct personal and slanderous attack on the person of Mr. Wilders, a fellow parliamentarian. Which made Dijkstal and Nijpels look like the outcasts they actually are.
– – – – – – – – –
Notable artists attended this demonstration fizzle, but some will not be happy that they did. The singer Frank Boeyen for example. Many of his fans didn’t appreciate it. It might be he gained a few during the demonstration, but he surely lost many more because of his presence. And even more because he, in the past, supported free speech… His audience clearly doesn’t appreciate turncoats.

As might be expected, the Fitna movie has been the talk of the day for many months. Other activists try to make it more difficult to find the movie, once it comes out, by spiffing the domain: they bought fitnathemovie.nl, org, doc, any domain name will do as long as it might divert traffic from this accursed movie.

Are Mohammedans really democratic? Well, in a democratic nation we do not practice censorship. Which means nobody can forbid Wilders to produce his movie. Only if and when he does he can be held responsible. A Muslim organization, the NMO (Dutch Muslim Broadcasting Organization) filed a kort geding, (a special fast track civil law suite) to force censorship before publication. Which, of course, is utterly impossible, given the current law in The Netherlands, and shows how desperate left-wing activists must be.

I’m not sure how many people, organizations and lawyers already filed lawsuits against Wilders. Gerard Spong, one of the best known (by criminals, that is) lawyers of The Netherlands did so too, with a team of law students, no less. So far, no luck. Not one lawsuit has been handled in court. All those intended lawsuits got much media attention. The fact that not one of them has been in court doesn’t. At least fifty lawsuits have been filed. None of them handled…

We saw several pillars of the politically correct establishment make complete fools of themselves: Doekle Terpstra and Harry de Winter. The last one is pretty well off, he can afford to dump €10,000 in a ditch. Both performed so well as national village idiots that for the foreseeable decades they won’t be offered anything else.

And let’s not forget our elected betters: the government and the civil administration. The prime minister cannot be held responsible for leaking as he didn’t do it. But the first rumors about the Fitna movie came from his ministry. From that moment on he showed he lacks something substantial: balls. He begged for forgiveness (for what? Nobody has even seen the movie!) and told the world not all Dutch are like that.

The Dutch embassy in Beirut shares his medical problem. They stopped hoisting the Dutch flag over the embassy compound ‘so as not to infuriate sensitive feelings’. That one didn’t ride well in parliament. The whole house was furious, and instructed the minister of foreign affairs, if necessary, to go personally to Beirut to hoist the flag! And that the complete staff of the embassy should be replaced immediately. The argument from the ambassador was waived aside, and rightly so. Not hoisting the flag doesn’t mean the embassy is invisible. We won’t hear much more about it, but rest assured that some careers will be terminated over this.

And the Dutch population in general? It seems most people support Wilders. If not actively, certainly passively. Demonstrations against Wilders fizzle out. This ‘Holland admits color’ isn’t the first one. In the past, the Left never found it difficult to drum up thousands of supporters for whatever reason. In fact, several left-wing activists boasted about it. But that is, fortunately, in the past.

Today the world is different, and we can be thankful for the Internet. Now you can see you aren’t the only one thinking something. You immediately see it in the replies on news articles of the mainstream media. In fact, when newspapers like De Telegraaf do not allow readers to post their opinion, it is suspicious.

In the past, it was very difficult to find like-minded souls: the left wing controlled the media completely. Then came the Internet and with it something that nobody thought possible: instead of the conservatives painting themselves constantly in a corner, it’s the turn of the Left.

Which they are doing pretty well.

12 thoughts on ““Fitna”: The Left Paints Itself into a Corner”