Below is an editorial from yesterday’s Jyllands-Posten about the ongoing Motoon crisis in Denmark, as translated by our Danish correspondent TB.

What would a responsible democratic government do when benighted opponents of democracy try to repress artistic freedom? 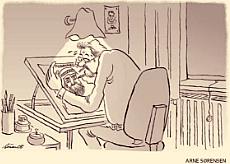 It would surround the artist and do everything that a state with all its instruments of power can do to secure it. At the same time it would make perfectly clear that any attempt against the artistic freedom which, like freedom of speech, is a precondition for democracy will be met with determination and all necessary measures available.

But not in Holland. There they bend over and crawl pathetically in a blend of political correctness and fear of what insulted Islamists can come up with in the way of threats, wanton destruction, arson, murder and whatever else these guys use as arguments.

A lot of bad things have already been said about the movie and its producer and politician, Geert Wilders.

No matter how unsympathetic this movie might be, and no matter what one might think of the politician and director, Geert Wilders is in this case completely irrelevant.

As stated previously in this newspaper, freedom of speech is not always pretty to look at, but that is what we have to cope with. The alternative is to get rid of the democratic form of government, and the world — through its past, present and possibly also the future — can give terrifying examples of what that would bring in its wake.

Holland has felt the results of Muslim insanity. A director was murdered, and a writer’s life has been threatened by many lunatics. The Dutch state underlines its view of liberty by refusing to pay for her police protection, so that she had to flee to a foreign country.

Actually, it looks like a confrontation is building up in the whole of Europe between a way of governing based on individual liberty and the separation of powers on the one hand, and on the other some rules of living dating back several millennia, originating from somewhere in the Middle Eastern desert, and built on supposed divine intervention.

The extreme and directly fascistic branch of Islam has specialized in acting infuriated on behalf of all Muslims, and answers verbal argument with threats, violence, and killings.
– – – – – – – – –
When a whole range of newspapers recently reprinted some drawings in connection with publicity about actual plans to murder the artist Kurt Westergaard, it caused a lot of consternation. Not because of the fact that somebody had planned a premeditated murder, but because some newspapers were shameless enough to print some drawings.

Spokesmen from the Vatican expressed support and solidarity. Not for the artist threatened with murder, but for the very forces which found an occasion to play at being insulted over some drawings.

The former Secretary General of the UN came out with a harsh critique of this newspaper because it published some drawings and the current Secretary General of the UN has come forward with a corresponding critique in connection with the murder plot against the cartoonist from this paper. It was not the murder plot against the cartoonist that made the SG angry — it was the fact that some newspapers had reprinted some drawings.

It is now clear to most of us what we — not only here but in the whole of Europe — are up against. The problem was very well defined in Debatten on DR2 [National Danish television] by the Jyllands-Posten commentator Ralf Pittelkow and the journalist Martin Krasnik on Thursday night.

In the same program the editor of Politiken, Tøger Seidenfaden, wrung his hands in an impossible attempt to explain logically the coherence of his arguments during the so-called Mohammed Crisis two years ago, and the recognition that he has now reached. In the same program the journalist Georg Metz demonstrated that there are still fools out there who have not understood one thing about what we are up against.