I consider myself a propagandist in my work here, but I’m a rank amateur of the trade in comparison with the people at the Barack Obama campaign.

I can’t bring myself to embed the video here, so you’ll have to go over to Fausta’s place to see the latest B. Hussein commercial. It is so creepy I couldn’t sit through more than twenty seconds of it, but Dymphna is made of sterner stuff, and watched the whole thing.

By the way, Dymphna is philosophically opposed to featuring any political/campaign material on our blog until late September or early October. However, she agrees with me that there ought to be exceptions to every rule, and this is one.

Do you remember Neo in The Matrix? That’s who Obama is. 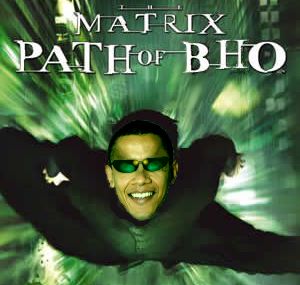 At the end of the video, just before the credits roll, I expect to see him go flying up into the sky.