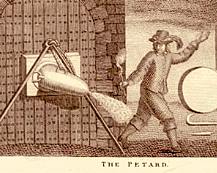 We are hoist on our own petard.

The Arabs know it. They know we’re running away as fast as we can, with our buttocks full of multicultural shrapnel.

Muslim leaders are fully aware of the rules of Western discourse. They can talk the talk as well as the most progressive Swarthmore alumna, and they know how to turn every phrase into yet another little grenade detonating under our infidel tushes.

Just read the press release published yesterday by the Organization of the Islamic Conference. Every word lines up perfectly with Western politically correct thinking — tolerance, discrimination, incitement, cultural understanding, harmony, etc. etc. — and every word adds another peck of gunpowder to the explosive device being prepared at our gates for the siege engine of the Great Jihad.

Here’s the entire text of the statement. I’ve highlighted a few interesting phrases for later discussion:

The increasingly negative political and media discourse in the Western World targeting Muslims and Islam is a matter of grave concern for the Islamic Ummah. Over the years the growing intolerance and discrimination against Muslims, and insults against Islam have become pervasive and often condoned in certain Western countries and communities.

Among the instances of Islamophobia are the publications of blasphemous caricatures of the Prophet Muhammad (PBUH) by newspapers in Europe, multiple campaigns for anti-Islamic regulations in several European Countries including the imposition of restrictions on the construction of places of worship, and the impending screening of a documentary by a Dutch lawmaker, which insults the Holy Quran. They constitute incitements for negative sentiments and hatred against Muslims. Apathy and inaction on the part of the governments concerned in preventing such provocations and discrimination against Muslims and Islam cannot be justified by the plea of freedom of expression. Unfortunately, such insults and intolerance against Islam are being provided intellectual justification by Western scholars and political lobbies who espouse anti-Islamic agendas, hence lending support to ideological violence against Muslims. Slogans such as “Islamo-fascism”, “Islamic Terrorism” and “radical Islam” are manifestations of and justifications for provocations and systematic insults against Islam. This phenomenon reflects the Islamophobia which afflicts segments of Western society.

The OIC Group believes that the right to freedom of expression carries with it special duties and responsibilities, and does not provide a license to insult and hurt the sentiments and beliefs of others. It is the obligation of all States parties to the International Covenant on Civil and Political Rights, in accordance with Article 20 thereof, to enact the necessary legislations to prohibit any advocacy of national, racial or religious hatred that constitutes incitement to discrimination, hostility or violence. The OIC Group observes that the European Court of Human Rights has previously ruled in favour of the interference by the State to prohibit media material in cases involving other religions to guard against igniting religious sensitivities, and expects equal treatment in cases involving Islam and Muslims’ rights.

The OIC Group in New York strongly deplores all acts of ideological and physical violence and assaults, and incitements thereto, against persons on the basis of their religion or belief, and those acts directed against the Holy symbols, sites or places of worship of all religions. The Group is particularly and deeply alarmed by the intensification of the campaign of defamation against Islam, as it impairs Muslims’ enjoyment of the right to freedom of thought, conscience and religion, and impedes their ability to observe, practice and manifest their religions freely and without fear of coercion, violence or reprisal.

Such acts against Muslims and Islam are inconsistent with the spirit of the UN Charter which seeks to promote peaceful co-existence amongst nations. They are in violation of numerous United Nations resolutions, including General Assembly resolution 62/154 on combating defamation of religions, General Assembly resolution 55/23 on Dialogue Among Civilizations as well as the Security Council resolution 1624 (2005) which call upon all Member States, inter alia, to continue international efforts to enhance dialogue and broaden understanding among civilizations, in an effort to prevent the indiscriminate targeting of different religions and cultures. Such acts also erode the positive momentum generated by the launch of the Alliance of Civilizations and General Assembly’s High Level Dialogue on Interfaith Cooperation for Peace, which, inter alia, aim to overcome misunderstandings between Islam and the West,

In the above context, the OIC Group in New York wishes to remind the joint statement of the Secretary-General of the United Nations with the Secretary-General of the Organization of Islamic Conference and the High Representative for Common Foreign and Security Policy of the European Union in Doha on 7 February 200& [sic — presumably intended to be “2008”] which recognized that ‘in all societies there is a need to show sensitivity and responsibility in treating issues of special significance for the adherents of any particular faith, even by those who do not share the belief in question.”

In particular, the OIC Group believes that lack of action to prevent the reprinting of blasphemous caricatures, and indifference in airing the inflammatory documentary against the Holy Quran will be perceived as manifestation of insincerity towards the principles and objectives of various efforts within the United Nations system aiming at promoting understanding and respect of and among cultures and civilizations.

The OIC Group urges the Secretary General to call upon the Governments of the States that condone the publication of these blasphemous caricatures and media material as well as the campaigns for anti-Islamic regulations to take all possible legal and administrative measures to prevent the repetition or continuation of these deliberate offensive acts, which impinge greatly on the right to freedom of thought, conscience and religion of the followers of Islam. The OIC Group requests the Secretary General to publicly express his unequivocal opposition to all acts of Islamophobia, and to declare that no government should be complicit in undermining the ongoing efforts to promote harmony and friendly relations amongst the various cultures, religious and civilizations.

intolerance and discrimination against Muslims

This phrase means that Muslims are denied the political expression of their “religion” as prescribed by their holy book. It means that they are unable to organize the infidel polities they live in according to the dictates of the Koran.

Islam wants to overthrow our blasphemous infidel governments and usher in the dictatorship of the Caliphate.

So we’re right to discriminate against Muslims.

The Big Lie in this case is that this is religious discrimination. It’s not; it’s the discrimination of a civilization and a way of life against those forces that would destroy it.

blasphemous caricatures of the Prophet

The caricatures are “blasphemous” only if you believe in Allah and the tenets of the Islamic faith. Blasphemy cannot exist absent that faith.

The use of this expression serves to highlight the urgency of repealing the remaining blasphemy statutes in Western countries. They are an atavism that we can no longer afford.

incitements for negative sentiments and hatred against Muslims

Only in the last forty years or so has there been any recognized right not to be the object of another person’s negative sentiments. No such right exists. If this were not an era characterized by mass insanity, no one would even entertain such foolish notions.

But the lunatics are now running the asylum.

I have a right to hate you if I want. You have no right to be free of my hatred. I can even scowl at you, or — gasp! — stick my tongue out at you, and your human rights are not thereby violated.

At least that used to be true until the dawning of the Multicultural Age. Muslims have noticed the new regime and have taken advantage of the fact that everyone (except for white males) has a right not to be offended.

This is part of the ongoing effort to reclassify certain non-violent activities as violent ones. If you’re a Mormon, and I offend you with my cartoon of Joseph Smith dressed in drag, then I have committed “ideological violence” against you, and the consequences to me will be the same as if I had beaten you to a bloody pulp.

justifications for provocations and systematic insults against Islam

The discussion of Islamic violence, radicalism, and terrorism is thus ruled off the turf because it allegedly causes bad feelings against Islam.

The original topic of discussion — murder, mayhem, theft, and enslavement in the name of Allah — is irrelevant. It has no bearing on the case. It’s not allowed.

The only crime is that of mentioning it.

the right to freedom of expression carries with it special duties and responsibilities, and does not provide a license to insult and hurt the sentiments and beliefs of others

Ah, yes: “I believe in freedom of speech, BUT…”

There is no freedom of speech if we all have a responsibility to say only inoffensive things. We then have the freedom to choose vanilla or chocolate, but no right to say, “I hate all ice cream.”

Notice how adept the OIC is at citing the various covenants, resolutions, charters, and agreements promulgated under “international law”. The UN and the EU receive a special mention. Coincidentally, these are the corporate entities most riddled with corruption and ineffectiveness, and are the most totally removed from any accountability to the people they supposedly represent.

incitement to discrimination, hostility or violence

Once again, the precedents set by supranational bodies are used designate free speech as incitement, and make a cartoonist functionally equivalent to a mob leader urging his followers to kill.

deplores all acts of ideological and physical violence and assaults, and incitements thereto

Here it is again: “We deplore all violence, and all incitements to violence.”

In other words: “You ridicule me. It makes me angry, and I kill you. Thus the two acts are morally equivalent.”

Rejecting this kind of specious nonsense should be our number one priority, but don’t hold your breath waiting for the elected leaders of the West to do so.

Except in Denmark, of course.

impedes their ability to observe, practice and manifest their religions freely and without fear of coercion, violence or reprisal

Once again, the observations, practices, and manifestations of Islam which are being impeded consist of political actions which violate the statutes and constitutions of Western countries.

I can’t stress this too strongly: We are asked to give up our existing legal structures in order to accommodate the “human rights” of Muslims.

Nothing less will satisfy them.

impinge greatly on the right to freedom of thought, conscience and religion of the followers of Islam

No Muslim in the West lacks freedom of thought. He may sit at home or kneel in the mosque and think and say whatever he wants about Allah and his messenger. He may stand on street corners and hold up signs proclaiming the perfection of his faith.

But all too often his “conscience” directs him to kill his sister, or mutilate his daughter, or kill any non-Muslim who fails to respect the Prophet. His religion puts him in direct conflict with the most basic moral laws of our society.

So whose conscience will win? Whose definition of “human rights” will be observed?

Who lays down the rules?

Update: I originally left out the link, but now it’s fixed.

19 thoughts on “Ideological Violence Against Muslims”