Our expatriate Dutch correspondent H. Numan reports on the latest news about the dhimmification of the Netherlands. First, his translation of an article in today’s De Telegraaf:

Scandal around a burka movie

Amsterdam — BNN broadcasting company and the public broadcasting organization manipulated a movie about women dressed in burkas in such a way that it appears people in Amsterdam avoid and ignore humans [that’s what it said in Dutch!] wearing this dress. We are pictured as a nation that intentionally ignores a woman in need who is wearing a burka. However, another local broadcaster published this piece of pure disinformation.

For this movie a female reporter employed by 101TV was dressed in a burka and send on the street to see how folks from Amsterdam would respond. 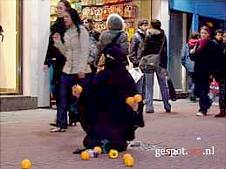 From tapes it shows that the woman is ignored when she’s dressed in a burka, but not if she wears ordinary clothing. This is shown when the woman, while wearing the burka, drops a bag of oranges and is ignored by passers by. Without a burka everybody is willing to help her to collect the oranges.

By sheer coincidence, a local city broadcaster, AT5, was taping in the vicinity. They show a very different side of this story. It appears clearly that bystanders who would like to help were stopped by the 101TV crew.

Lodewijk Asscher, the vice-mayor of Amsterdam, was really pissed after seeing these tapes. “I am a citizen of Amsterdam. My town is pictured as a city that doesn’t give a s**t. You see people who’d like to assist this lady in distress, but obey the shouts ‘move along, move along, this is a movie!’ It paints a picture that people are ignored if they wear a burka. Completely wrong, and disgraceful,” said Asscher to AT5.

Paul van Keulen, chief editor of 101TV, considers the incident exaggerated. “We work with young people, and young people sometimes create a bit of their own truth. One may hope it never happens, but in this case I find 90% accuracy depicted in this subject.”

According to him the female reporter walked for three hours helplessly through the city, but only when the AT5 crew came in view did people started to offer help.

For some people the end justifies the means. This is one of them. He wouldn’t be in a wrong position as Volks Nachtrichten Leiter in former East Germany. The news? That’s what we create ourselves. To serve the party.

My fellow countrymen live nowadays in a strange society. The press controls the politicians, and woe betide the blond rascal who’s misbehaving! But this press is also controlled by the government. Woe betide the newspaper or broadcaster who publicly supports blond rascals!

A similar piece of disinformation appeared on the 20:00 public news. Geert Wilders was vilified in the most blatant way. Some Muslims were filing lawsuits against him. Wilders appeared only in a few shots, and only in black-and-white. His words were intentionally placed out of context, so it would support the image of a blond Hitler on his way to the gallows.

9 thoughts on “From Your Friendly DDR News Station…”