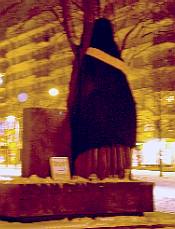 I have written previously about the “veiled statues” actions in Europe. The movement started with an event in Germany last September, and expanded to include other German-speaking countries with an action in November.

This morning residents in Germany, Finland, and Russia woke up to find veiled statues in their cities. The event is timed to coincide with International Women’s Day, with the aim of reminding people in Europe of the widespread oppression of women under Islam in countries all over the world.

Europe News and Tundra Tabloids are also reporting on this latest counterjihad action.

Below is the press release from the Anonymous Group of Democratic and Free Thinking, the group that organized the event.

Veiling of public statues
at the International Women’s Day 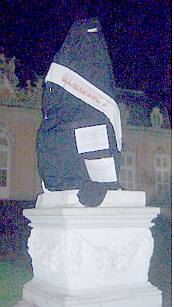 Throughout the night on 6th of March we have successfully continued our statue veiling campaign. With this reappearing action we want to inspire the public to a discussion concerning Islamisation and associated taboo subjects. By veiling statues in Berlin, Braunschweig, Dortmund, Düsseldorf, Helsinki, Moscow, Tampere, and Turku, we have expanded our activities to Germany, Finland and Russia within six months.

The aim of the campaign is to refer to the creeping Islamisation endangering the European idea of UNITY IN DIVERSITY and other similar cultural achievements of the liberal thinking world. In particular, the phenomenon that Muslim women increasingly wear burqas or headscarves is a visible expression of the challenge and threat to our liberal societies with their values such as women’s rights, democracy, liberal and secular thinking.

With this campaign we would like to increase public awareness of our liberal values and to advocate for them. The liberal achievements such as equal rights for men and women, individual freedom, human rights, and the dignity of each individual are non-negotiable values! We would like to point out that substantial and partly irreconcilable differences exist between the Muslim and the liberal thinking world.

Many Muslims are led by religious systems and by affiliated traditions such as Sharia, which is a strict code of conduct and justice. Therefore parallel societies emerge and flourish in which completely different values exist. For instance, in Muslim societies referring to Quran and the Sharia, the supposed honour of a woman is much more important than her education or self-determination.

Both the Quran and Sharia have to be taken literally. For the theological authorities as well as for the population of the Muslims, it is out of question whether the content is valuable or not. In the Muslim and non-Muslim countries the Muslim women are mostly underprivileged. The higher social position of the man (with regard to justice, legal authorities, marriage and family law), and the decision-making process (even with regard to sexual issues) show that women’s rights are undermined not only by the religious but also the cultural restrictions.

Every citizen — native or foreign — needs to be aware of all basic laws which are enacted in his or her country. One of these basic laws is the equality of men and women. The fact that in our liberal western societies people have to live inhibited is a sign of failed integration as well as a sign that liberal thinking and Muslim values are hardly compatible.

Through our action we want to show that there exist taboo subjects in a certain religious movement, therefore we need to deal with them at once. We are not supposed to do the same, and shall speak about certain subjects that are still being treated as taboos. It is not racist to point out these issues, it is racist to keep ourselves from protecting and advocating for the rights of the women in the Muslim world, whether they live in foreign countries or in ours. So, where are the women’s rights activists who used to stand up for women’s rights for the Western women in the our world? There is no reason and no need to leave these Muslim women alone without help in sight.

We would like to compare two quotes, one is taken from the Declaration of Human Rights and one is chosen from the Quran in order to show where the substantial differences are:

“All human beings are born free and equal in dignity and rights. They are endowed with reason and conscience and should act towards one another in a spirit of brotherhood.”

“To those (women) on whose part you fear desertion, admonish them, and leave them alone in the sleeping-places and beat them.”

We need to strive to actualize the Human Rights Charter in its totality everywhere in the world. Neither the Quran nor the Sharia can be seriously put on the same level with the Universal Declaration of Human Rights of the UN.

We are not the only ones who need to be responsible for dealing with these subjects; the state itself has got its responsibility, too. For instance, the third part of the Principals of Limburg, which were formulated by a group of Human Rights Experts from UN in 1986, refer to the view of warranty. The state which signs the Declaration of the Human Rights has to take care for the total implementation of these. Hence, we have a responsibility to advocate for the Muslim women who live under difficult circumstances in our societies.

3 thoughts on “The International Veiling of Statues”