The United States has appointed a presidential envoy to the Organization of the Islamic Conference, and the OIC speaks approvingly of him.

I don’t know about you, but that makes me nervous. And President Bush, in announcing the appointment on February 28th, did nothing to alleviate my nervousness.

According to The Austin American-Statesman:

President Bush tapped Austin technology executive Sada Cumber on Wednesday to represent the United States to Muslims around the world.

“The core of his mission,” Bush said in announcing the appointment, “is to explain to the Islamic world that America is a friend — is a friend of freedom, is a friend of peace, that we value religion.”

Bush said part of Cumber’s role will be to correct misperceptions about the United States. “A lot of people love America, don’t get me wrong,” Bush said. “After all, there’s a lot of people trying to come here because of what we stand for. But we’ve got work to do in certain areas.”

I respectfully disagree. The core of Mr. Cumber’s mission — or the mission of any American envoy or ambassador — is to represent the interests of his country to his host organization or country. Nothing more, nothing less.

And what work do we have “to do in certain areas”? This sounds rather ominous. Is it now time to regulate “hate speech” about Islam, the way the European governments do?

In any case, we’ve got no business trying to prove our friendship to Muslims. That’s a real monkey trap, and we’ll be left standing there like idiots with our hand stuck in the jar while the Caliphate is constructed around us.

They can start by explaining the discrepancies between the pious English-language platitudes uttered at the UN and the “death to infidels” rhetoric shouted to the crowds at home in Arabic.

They can explain why their clerics issue death fatwas against people who draw cartoons, make movies, or publish books.

They can explain why they demand more mosques and special accommodations in Western countries when no one can build a church or read a Bible in Saudi Arabia.

And that’s just for starters.

A point in his favor is that Mr. Cumber is an Ismaili, a member of an Islamic sect that has often been persecuted by Sunni Islam. His appointment also received glowing approval from the World Muslim Congress, which has observer status at the OIC.

But what is the World Muslim Congress? You can spend hours searching the internet for information on the organization and find nothing very alarming — it is a recognized NGO at the UN, has chapters all over world, and has gone on the record repeatedly with laudable sentiments against the excesses of Islamic radicals, including CAIR.

But the World Muslim Congress (Motamar Al-Alam Al-Islami) was founded in 1926 under the leadership of King Abdul Aziz of Saudi Arabia, with the assistance of Haj Amin al-Husseini, the Grand Mufti of Jerusalem. In 1931 Sheikh al-Husseini became the first president of the organization. 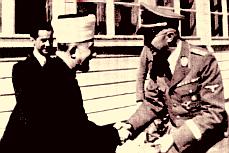 The Grand Mufti, as you will recall, was also an admirer of the Nazis, and assisted the Reich during World War Two. He was greeted as friend by Hitler and Himmler in Germany, and enthusiastically discussed with the Nazi leaders their plans for the extermination of European Jewry.

Here’s the full text of yesterday’s press release from the OIC about the appointment of Sada Cumber. I’ve highlighted the interesting parts:
– – – – – – – – –

The US Special Envoy to the Organization of the Islamic Conference (OIC) Mr. Sada Cumber called on the OIC Secretary General Prof. Ekmeleddin Ihsanoglu at the latter’s office today on March 5, 2008. Mr. Cumber is appointed last week as the Special Envoy of the USA to the OIC by US President Mr. George W Bush following his announcement made in this regard in June 2007 while delivering a speech at the Islamic Center of Washington.

The appointment is a part of the US President’s effort to strengthen USA’s friendship with the Muslim Community worldwide.

The Secretary General appreciated the initiative of the USA to reach out to the Muslim World in a positive manner and underlined Mr. Cumber’s appointment as a significant step towards having respectful and meaningful dialogue and continued friendship between the Muslim World and West.

The Special Envoy informed the Secretary General that he enjoys a direct mandate from the President to find out the ways and means of cooperation with the OIC and its Member States especially within the framework of the OIC Ten Year Program of Action. He sought the guidance and suggestions from the Secretary General and his staff for making his endeavor a success. He said that the USA is fully committed to engaging itself with the Muslim World in order to enhance the friendly relationship towards eliminating the misgivings and misperceptions about each-other.

The Secretary General said that the OIC expects the Special Envoy to exert sincere efforts to project the true image of Islam in the US Society and convey the views and expectation of the Muslim World on various issues to the US public opinion. Mr. Cumber said that this would be one of the major thrusts of his assignment as the Special Envoy and his office would be in constant touch with the OIC for furthering the cooperation in a concerted manner.

The Secretary General invited the US Special Envoy to the 11th OIC Summit to be held in Dakar on 13-14 March 2008. Mr. Sada Cumbers expressed his gratitude to be invited and accepted the invitation.

The meeting ended with the Secretary General and the Special Envoy giving a short audience and briefing to the Press.

What friendship with the Muslim community? Who is friends with whom?

President Bush is friendly with any Muslim who sits atop a trillion barrels of oil. But who else?

We know the meaning of “respectful and meaningful dialogue”. The Motoon crises, the fate of Theo Van Gogh, and the treatment of Geert Wilders have taught us that.

Dialogue is respectful and meaningful when it never, ever says anything critical or insulting about Islam.

The “true image of Islam”? What is truth?

And especially: what is Islamic truth? Is it told by Islam itself?

What if I say this: “Hundreds of millions of people have been slaughtered and enslaved by Islam since the 7th century, and many thousands more are killed every year in the name of the Prophet.”

Is that true? Does it project a true image of Islam?

If not, then I guess Pilate was right.

And, by the way, I’m still nervous.

Hat tips: KGS for the WMC blog entry, TB for the OIC statement.

6 thoughts on “Our Man in the OIC”