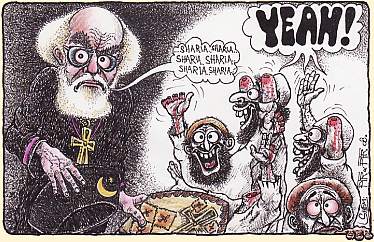 The row over the declaration in support of sharia by the Archbishop of Cant has had the salutary effect of uniting British Christians against Dr. Williams and the policies of their own government. One of our commenters suggested that the Archdhimmi was simply a “toe testing the waters” to see how favorable the climate is for the gradual introduction of sharia for Muslims in the UK. If he’s right, and the governing elites sent Dr. Williams on a little reconnaissance mission, surely they must have concluded by now that their idea was a little bit — ahem — premature.

Now the Catholics and the Anglicans are ganging up on the poor Archdhimmi. The former Archbishop of Canterbury and the Cardinal responsible for Roman Catholics in England and Wales have weighed in against Dr. Williams and his ill-advised words:

Senior religious leaders attack multiculturalism and sharia law today, warning that they are “disastrous”, socially divisive and are destroying Britain’s culture and values.

Lord Carey and Cardinal Cormac Murphy-O’Connor rebut the call of the Archbishop of Canterbury, Dr Rowan Williams, for Islamic law to be recognised in Britain.

Lord Carey, the former archbishop of Canterbury, said: “His acceptance of some Muslim laws within British law would be disastrous for the nation. He has overstated the case for accommodating Islamic legal codes.

“His conclusion that Britain will eventually have to concede some place in law for aspects of sharia is a view I cannot share.

“There can be no exceptions to the laws of our land which have been so painfully honed by the struggle for democracy and human rights.”

In an interview with The Sunday Telegraph, Cardinal Murphy-O’Connor, the leader of the Roman Catholic Church in England and Wales, said that the Government’s promotion of multiculturalism had destroyed the unity that used to hold society together. Immigrants must “obey the laws of this country”.

It wasn’t that long ago that Catholics were considered agents of the pope ready to subvert the countries in which they lived. But times have changed.

Writing in this newspaper, Lord Carey condemns multiculturalism as “disastrous”, blames it for creating Islamic ghettos and says that Dr Williams’s support for sharia law will “inevitably lead to further demands from the Muslim community”.

He suggests that such a move could embolden some Muslims to try to turn Britain into a country ruled by Islamic law which, he says, contradicts principles of human rights and allows the persecution of Christians.

Their comments will come as a blow to the embattled archbishop, who is experiencing the darkest days of his six years as leader of the Anglican Church, following his claim that the adoption of certain aspects of sharia law is “unavoidable”.

It also marks a deepening of the rift between Dr Williams and leading church figures over his support for Islamic law. The Bishop of Rochester, Dr Michael Nazir-Ali, said that it would be “simply impossible” to have two different legal systems.

I admit to being surprised at the depth of the antagonism towards the Archdhimmi, especially from within the Anglican hierarchy. Is it possible that they have been roused from slumber? Do their noses in fact detect the scent of coffee?
– – – – – – – – –

Dr Williams sought to defend his comments yesterday, but is fighting to survive calls from politicians and members of his church demanding his resignation. The vast majority of the Church’s ruling body believe he was wrong, a Sunday Telegraph poll shows.

The survey of the General Synod found that only three per cent agreed that aspects of Islamic law should be adopted. Four per cent said he should resign, but two thirds rejected claims that he had lost credibility. A number of bishops have spoken out against the attacks on the archbishop, but a far greater number, including the Archbishop of York, Dr John Sentamu, have chosen to distance themselves from the issue.

Dr Williams argued that Muslims should not have to choose between “the stark alternatives of cultural loyalty or state loyalty”. However, Lord Carey says the potential damage of Dr Williams’s idea of incorporating sharia courts into civil law “does not bear thinking about”. He says that it would be dangerous and would encourage some Muslims to try to turn Britain into an Islamic state.

The former archbishop says that accommodating sharia law would lead to further demands. “This is absolutely inevitable, since questions to do with the separation of ‘church and state’ are largely new to Islam. Sharia law trumps civil law every time.”

He adds: “Many Muslim interpreters of sharia believe that it supersedes secular law and assume that its ‘God-given’ status would lead to the point of eventually replacing civil law.”

Lord Carey is quite right. In the end, there will be no compromises with sharia or with Islam.

The archbishop had argued that the introduction of parts of Islamic law would help improve social cohesion, but Cardinal Murphy-O’Connor joined Lord Carey in attacking this idea and urged Muslims to do more to integrate.

“The extent to which multiculturalism has been encouraged recently has meant a lessening of the kind of unity that a country needs,” he told this newspaper. “There are common values which are part of the heritage of this country which should be embraced by everybody.

“I don’t believe in a multi-cultural society. When people come into this country they have to obey the laws of the land.” He says that sharia law clashes with British culture and stresses that the Government must act to stop the acceptance of foreign practices. Last week, this newspaper revealed that men with multiple wives had been given the go-ahead by ministers to claim extra welfare benefits.

“The laws of this country don’t allow forced marriages or polygamy,” Lord Carey writes. “A government and a country has a right to make sure those laws are kept.”

A government keeps the mandate of the people only so long as it upholds the laws of the land, which represent the codified will of the people themselves. A government which fails in this task is illegitimate, and may be dissolved by the people by any and all means necessary.

This is the first Sunday of Lent, so it’s appropriate to remember the exchange between Pilate and Christ on Good Friday (John 19:10-11):

So Pilate said to him, “You will not speak to me? Do you not know that I have authority to release you and authority to crucify you?” Jesus answered him, “You would have no authority over me at all unless it had been given you from above. Therefore he who delivered me over to you has the greater sin.”

Hat tips: TB for the article, Steen for the cartoon.