After the Great War, under the Treaty of Saint-Germain in 1919, several million ethnic Germans living in a region known as the Sudetenland (a part of Bohemia and Moravia) were included in the new state of Czechoslovakia. The relations between the Sudeten Germans and the Czechs remained a bone of contention during the interwar years.

Adolf Hitler appointed himself the protector of the Germans in the Sudetenland, and various incidents — some real, some manufactured — were used to inflame German public opinion about the oppression of the Sudeten Germans by the Czechs. The growing tensions culminated in the Munich Agreement in September of 1938, in which Czechoslovakia surrendered the Sudetenland to Germany under pressure from Britain and France. Czechoslovakia was fatally weakened by the loss of the Sudetenland, and the entire country was occupied and annexed into the Reich in March of the following year.

I bring all this up because the current situation of ethnic Turks within Germany bears an uncanny similarity to the Sudeten crisis. The parallels are not exact — the Germans had been resident in the Sudetenland for centuries, whereas the Turks have been in Germany for less than fifty years — but still, the analogy is compelling. 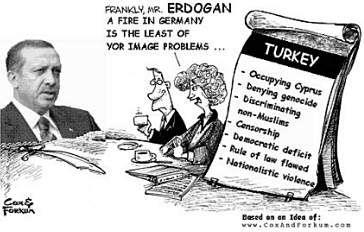 (Photoshop by Europe News; original by Cox and Forkum)


Turkish Prime Minister Recep Tayyip Erdogan has set himself up as the protector of German Turks, and the Turkish government and the news media in Turkey have whipped up the Ludwigshafen fire into a crisis in Turkish-German relations. The recent DDOS attack against Europe News and various German blogs was trumpeted by the Turkish nationalists who did the hacking as revenge for the fire.

Excessive Turkish reactions to the fire in Ludwigshafen

While Denial of Service attacks and cracking into servers is annoying, what is more sinister is the background and the behavior of the Turkish press and politicians. They reacted to a bit of graffiti on the burned-out building, as if graffiti weren’t everywhere in Germany, and jumped to the conclusion that this would most likely be the beginning of a new wave of racist attacks on Turks in Germany, like the racist arson attack in Solingen in 1993.

By reacting in this way, however fickle the evidence, the Turkish politicians are posing as the protectors of Turks in Germany, disregarding the fact that Germany has a fine legal system. That includes the Turkish prime minister Erdogan visiting the place of the fire, holding a joint press conference with Angela Merkel and lots of press articles recalling the, implying that now a new wave of racist attacks against Turks is looming. Indicative of the distrust from the Turkish side, a Turkish investigation team was sent to the site as well — Germans should be perfectly able to examine the site themselves.

This spectacle by the Turkish politicians ignores the fact that the fire-fighters were doing a marvelous job (no ‘racism’ here), that the cause of the fire is still unknown after four days of investigation and might be simply bad electric circuits. Also ignored is the context that the 1993 attack was extensively exploited by Turkish investment groups to discourage Turks in Germany from investing their hard-earned money in Germany. Later these Turkish investment groups went into bankruptcy, losing €25 billion in a network of AKP-connected businessmen (and probably AKP itself). The potential gains by creating another Solingen-like crisis are impressive.

Finally, the performance of the Turkish politicians posing as the protectors of Turks in Germany is a divisive move eerily similar to the events that eventually led to the division of Cyprus. This is counter-productive to integration but fits well with the “special role” Erdogan assigns the Turkish diaspora in Europe. We are on the edge of insurgencies in many places, most recently in Cologne.

What we would like to see from the German politicians, instead of the nice photo-ops, is a clear statement that there is no need to assume racist motives for the fire, no need for ministers of foreign nationality to intervene in the matter, and that the German authorities are perfectly capable of investigating the matter on their own. The Turkish government is already much over the top on this matter and can use a polite lesson on respectfully abstaining from meddling in the internal affairs of other countries and on the primacy of the Rule of law.

Then, suitably, apply that lesson to Turkey proper, where violence against non-Muslims is a significant problem, much more so than any graffiti-based rumors of arson.

The latest news report from Spiegel indicates that arson was unlikely to be the cause of the fire. The testimony of two little girls (the primary source of the arson rumors) contradicts the physical evidence, the testimony of other witnesses, and even each other. John Rohan at Shield of Achilles has more details.

The claim of arson at Ludwigshafen is a thin reed on which to build a crisis in international relations. But mere plausibility has never gotten in the way of ethnic demagoguery, as the events of the 1930s showed all too well.

It’s instructive to remember the ultimate fate of the Sudeten Germans: after their incorporation into the Reich, followed by six years of war, they were forcibly and brutally expelled from Czechoslovakia under the Beneš decrees.

Are the Turks in Germany willing to bet that the Sudeten analogy is not complete?

19 thoughts on “The Sudeten Turks?”