Our Austrian correspondent ESW sends a translation of part of an article about Turkish political activity in Lower Austria. First, her cover note:

Following the local elections in the city of Graz, there are state elections planned in Lower Austria (the state surrounding Vienna). Here is a translation of part of a newspaper article about a group of migrants (mostly Turkish migrants) who are entering the election process with their own Liste für unser Niederösterreich, List for our Lower Austria.

And now for the translation: 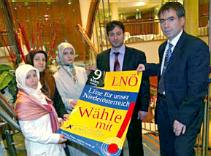 A coalition of migrants of Turkish descent are running for election in a state election. The candidates were presented on Thursday.

Seyfi Öztürk, the top candidate for the “List for our Lower Austria” (LNÖ), is in favor of building mosques in Lower Austria. “The building of these mosques should even be boosted”, says the 38 year-old from the city of Baden. “We don’t want these Turkish cultural societies to establish mosques in cellars.”

A minaret has to be added as well because a church also has a tower. But: “There needs to be a solution that is satisfactory for both sides.”

It is the first time for a political group comprising Turkish migrants to run for election. Women were ostentatiously clad in hijab, saying that this is a religious symbol. However, “It’s also all right if a woman decides against wearing a hijab”, says Aysun Güney, a dress maker and ranked number two on the list.

“We want to show our strength”, the group says. They see a potential of 50,000 Muslim votes in Lower Austria, calling for dialogue and multiculturalism.