UPDATE: On Pajamas Media, Wretchard has a report and analysis of the farce that was Bali’s UN meeting on climate control and global warming:

Environmentalism has become the political lifeboat into which the survivors of the socialist shipwreck have crammed themselves. The need to “manage the climate” became the new foundation on which to base regulatory structures, impositions, and taxes which were formerly justified by the imperative to manage the “commanding heights of the economy.” Kyoto was the highest expression of the program to “manage the climate” and provided the same new basis for socialistic policies that Marxism once did…

…Reducing “carbon emissions” really meant reducing economic output in a world where poverty is a major problem. They were caught between the Scylla of having to maintain a commitment to environmentalism and the Charybis of recession. So the politicians and celebrities at Bali driven by the need to keep the circus going and uninhibited by the Green equivalent of a Bolshevik Party did the obvious thing: they created a shell game tricked out as an emissions control scheme. Bali would no more reduce “carbon emissions” than Kyoto did, but it would give the impression of doing so. And that would be enough, wouldn’t it?

The whole essay is done in Wretchard’s inimitable style. Besides that, you get to find out where the term “moonbat” originated. 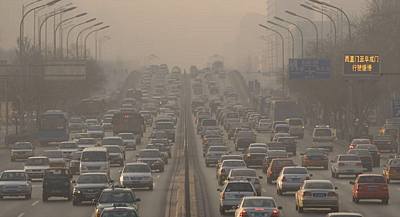 This is Beijing during rush hour.

This is China’s part in the global smog:

In 2004 the total greenhouse gas emissions from the People’s Republic of China were about 54% of the USA emissions. However, China is now building on average one coal-fired power plant every week, and plans to continue doing so for years. Various predictions see China overtaking the US in total greenhouse emissions between late 2007 and 2010, and according to many other estimates, this already occurred in 2006.

The Chinese government insists that the gas emissions level of any given country is a multiplication of its per capita emission and its population. Because China has put into place population control measures while maintaining low emissions per capita, it claims it should therefore in both of the above aspects be considered a contributor to the world’s environment. In addition, the country’s energy intensity – measured as energy consumption per unit of GDP – was lowered by 47 per cent between 1991 and 2005; from 1950 to 2002, China’s carbon dioxide emissions from fossil sources accounted for only 9.33% of the global total in the same period, and in 2004, its per-capita emission of carbon dioxide from fossil sources was 3.65 tons, which is 87% of the world average and 33 per cent of that of Organization for Economic Co-operation and Development countries.

In June of 2007, China unveiled a 62-page climate change plan and promised to put climate change at the heart of its energy policies but insisted that developed countries had an “unshirkable responsibility” to take the lead on cutting greenhouse gas emissions and that the “common but differentiated responsibility” principle, as agreed up in the UNFCCC should be applied.

In response to critics of the nation’s energy policy, China responded that those criticisms were unjust, while studies of carbon leakage suggest that nearly a quarter of China’s emissions result from exports for consumption by developed countries.

In other words, says China, “you can’t criticize us because we’re just making stuff for you.” How unselfish of them.

To gauge by the level of smog in Beijing, it may not have been the best place to have the Olympics.

16 thoughts on “Beijing’s Air Quality and the Olympics”