For a variety of reasons, Forkum, of Cox and Forkum, has put down his pen. There will be no more of those C & F zingers we all so enjoyed. Mr. Forkum explains some of his reasons:

Let me start by saying that quitting editorial cartooning has been one of my toughest decisions. Having such a creative outlet for expressing my opinions is immensely satisfying. It’s an art form I’ve admired for decades, so I do not take lightly having the opportunity to work in the medium and to have that work seen by others. One of my proudest moments came soon after 9/11 when I held in my hands our first published cartoon. It was easy to feel useless, even helpless, in the weeks and months following the attacks. But to be able to fight in the battle of ideas was empowering. 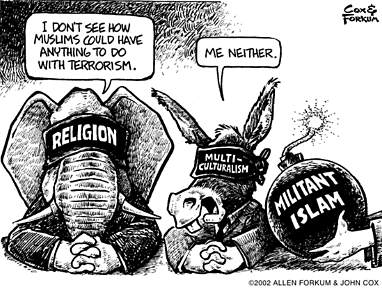 The most powerful evidence of the truth of their illustrations is that Cox & Forkum’s cartoons haven’t dated. In fact, because they have intuited the fault lines so well, their work won’t date until this battle with global islamofacism is history. Then they will enter the books reserved for things like, say, the WWII cartoons or the ones that sketched out the battle lines of the Cold War. When this is over, Cox & Forkum’s body of work will serve to evoke an accurate history of a dark and uncertain time.

Here are two of their cartoons we used at Gates of Vienna in 2006.

Good principles and eternal ideas stand up to the humor directed at them. One of the reasons that excitable muslims threaten fatwas on those who poke fun at their icons is a profound uncertainty that pervades their world view.

Uncertainty is not the same as doubt. The latter is a normal part of a belief system. It is what sends us back to ponder and reformulate those things which we consider foundational. Doubt is intrinsic to faith; the kind of faith which is so rigid and brittle that it cannot laugh at itself or allow others to do so is not authentic belief; it is magical thinking. Every time CAIR blows out of proportion some slight, or when Rage Boy, Inc. starts setting fire to things or issuing righteous fatwas, you know you are witnessing pathology, not an authentic loyalty to an idea or ideology. The more a group finds humor in its own foibles, the stronger and more resilient that group proves itself to be.

Islam has yet to lighten up.

Forkum goes on to say:

The editorial work [those wonderful cartoons, he means – D] though intellectually rewarding, is not very rewarding financially. Furthermore, researching the cartoons, writing/designing them, managing the blog, publishing the books, marketing them, and running the business side all take an enormous amount of time.

All of that comes with the territory, of course, and John and I have done pretty well over the last six years. We’re fairly well known on the Internet, we have a few newspaper and magazine clients, we’ve self-published four books, and we’ve made some money, if not a living. But lately, for reasons I won’t go into here, I can no longer afford to divert so much time and attention away from my publishing business and other personal concerns, such as my family.

I also want to stop focusing so much of my creative energy on negative aspects of daily life. There’s still an ideological battle to be fought, not to mention an actual war, and I will stay engaged in some form and medium. But at this point, anything seems more appealing than immersing myself in the sewer of daily politics. [my emphasis – D.]

He goes on to add his gratitude to several people who helped Cox and Forkum become such favorites:

There are many people we’re grateful to for their support, from bloggers, to clients, to friends. I can’t begin to list them all here; hopefully you know who you are. But there are two “firsts” I want to mention by name. Robert Tracinski was the first to publish one of our editorial cartoons…in the November 2001 edition of The Intellectual Activist. And Charles Johnson at Little Green Footballs was the first major blogger to regularly post our work on the Internet…They both saw value in our work, and we thank them for publicizing our cartoons when others wouldn’t.

You can buy their book, “Black and White,” here