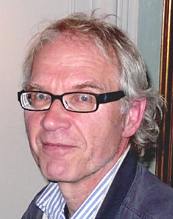 Lars Vilks, the Swedish artist behind the infamous Modoggies, paid a little visit to his cousins in Denmark.

Trykkefrihedsselskabet, the Free Press Society, convened tonight in Copenhagen to proclaim its solidarity with Mr. Vilks. To the great surprise of most of the participants, the artist himself was there as the guest of honor.

Steen was there with his camera, and has kindly given me permission to post these photos.

Also present was Kurt Westergaard, the cartoonist who drew the Turban Bomb Mohammed, the most well-known of the Motoons. He’s shown in the photo at right, with Lars Vilks standing on his left.

Naser Khader, the leader of the Democratic Muslims, was also there, as was Flemming Rose, the editor of Jyllands-Posten. Mr. Rose and his newspaper launched the Mohammed cartoon crisis in the fall of 2005 by publishing twelve cartoons of the Prophet. 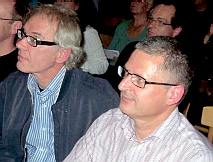 You can see him at right, sitting with Lars Vilks.

Steen’s post is in Danish, so I can’t tell you much more about the meeting. One of my other Danish contacts was there, and sent this brief description:

Lars Vilks was relaxed and extremely funny. He made a lot of friends, too.

The secrecy was so tight, that I didn’t know ahead of time that he would be there. But it also meant that there was no TV, so there was no video report on the event.

Despite the humor and the festive nature of the occasion, it’s worth remembering that people are trying to kill these “blasphemers”. As the Danish blog Pundokraterne notes:
– – – – – – – – –

During the trial at the Courthouse in Odense one of four individuals accused of planning terror attacks in Denmark divulged that he and the three others, together or separately, had discussed and/or worked on several planned bomb attacks. One of the ideas discussed included the construction of a remote-controlled bomb that should have been directed against Rose. The bomb would be planted in a car that was supposed to be driven into Rose’s private home. (It has already been uncovered that “A.K.”, the particular member of the group who suggested the idea, had considered killing one of the cartoonists. He also wrote letters in praise of Osama bin Laden and Abu Musab Zarqawi and offered himself: “Revenge, revenge! I am the first volunteer! God is great!”)

Lars Vilks can be seen below, holding the Modoggie that got him into so much trouble, the one that was published in Nerikes Allehanda. 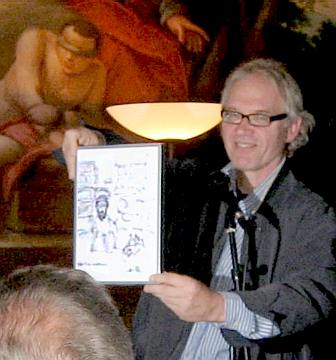