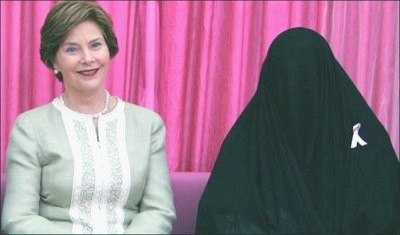 I didn’t know Muslim women could pose for anything symbolizing “that” body part. Good to learn something new.

Or is that a woman under the tent? Who could tell?

Meanwhile, Laura’s frozen smile has that wifely expression you can sometimes see at parties when a husband is ignoring the secret signal that says, “wait till I get you home, George.”

The things we do for love.

Hat tip: Jammie Wearing Fool, among many others. He has the details on Brea** Cancer Awareness Week.

Jeez, these women can’t drive but they can show up for phot ops like this one.

16 thoughts on “Just Wait Till I Get You Home, George”