Tech Central Station is reporting on a story of the secret court martial in July of a sergeant who has been stealing intelligence files and giving them to law enforcement officers involved in anti-terrorism work in southern California. 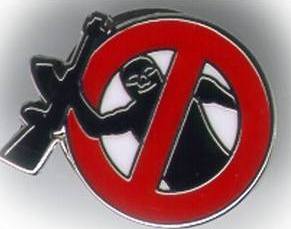 Marine Gunnery Sgt. Gary Maziarz said patriotism motivated him to join a spy ring, smuggle secret files from Camp Pendleton and give them to law enforcement officers for anti-terrorism work in Southern California.

He knew his group was violating national security laws. But he said bureaucratic walls erected by the military and civilian agencies were hampering intelligence sharing and coordination, making the nation more vulnerable to terrorists.

Maziarz, a member of the Marine Forces Reserve, had helped search for survivors in New York after the Sept. 11, 2001, terrorist attacks.

“I decided to make a difference and act,” Maziarz testified during his court-martial in July at Camp Pendleton.

Now Maziarz and his alleged conspirators are being investigated by the FBI, National Security Agency and Naval Criminal Investigative Service.

Details of Maziarz’s case emerged after he pleaded guilty to mishandling more than 100 classified documents from 2004 to last year. The overall breach could be far larger: Investigators believe that as far back as the early 1990s, the intelligence-filching ring began taking hundreds of secret files from Camp Pendleton and the U.S. Northern Command, which tracks terrorist activity in the United States.

The San Diego Union-Tribune pieced together the story by reviewing material from Maziarz’s court proceedings and interviewing people familiar with the case. Those sources asked not to be named because they’re banned from revealing contents of an ongoing investigation.

During his trial, Maziarz said he passed the classified files to at least four men. These alleged accomplices were military reserve officers, and two of them also worked with anti-terrorism units for police and sheriff’s departments in Los Angeles County.

Maziarz said he took the documents while serving as an intelligence analyst for the 1st Marine Expeditionary Force at Camp Pendleton. In a plea agreement, he received a 26-month jail sentence in exchange for detailing the spy ring. He also agreed to testify against his alleged accomplices if they are charged.

The plea deal bars Maziarz, 37, from talking with the media. His purported conspirators could not be reached for comment, and investigators refused to discuss any developments.

The case is an intelligence nightmare, said defense analysts briefed on it.

They also said it unmasks the military’s growing role in post-Sept. 11 domestic security and confirms that U.S. officials believe al-Qaeda is active in the United States.

“It gives operational security people brain cooties to think about an incident like this,” said John Pike, director of GlobalSecurity.org, a think tank that focuses on emerging security concerns.

“It’s the apparent extent of this intelligence hemorrhage and the fact that they caught someone and prosecuted him that make this case stand out,” he added.

Steven Aftergood, a research analyst for the nonprofit Federation of American Scientists, couldn’t remember another instance of people being driven by patriotic frustration to break the law.

“It’s incredible. We had better understand their motivations or else this is going to keep happening,” said Aftergood, whose organization works to reduce government secrecy while improving security practices. “The failure of agencies to share information is a real one and has been raised over and over again without a satisfactory resolution.”

…many of the war veterans have actually seen real jihadists, either armed with an AK-47 or smirking from a street corner as the U.S. soldiers drive by. For the vast majority of Americans back home by contrast, an al Qaeda terrorist is an abstract and increasingly mythical concept as the harsh memories of September 2001 fade into misty oblivion.

There was apparently no such fading memory for Gunnery Sergeant Maziarz and his alleged conspirators. This is also likely the case for many thousands of additional U.S. combat veterans who have seen the violent face of the jihadists.

America’s war veterans are for the most part intelligent, perceptive, and aware of the debates that go on about America’s foreign policy. And they have far more practical experience to bring to these discussions than the vast majority of Americans.

Gunnery Sergeant Maziarz has confessed to crimes and will suffer criminal punishment as a result. His alleged conspirators are likely in legal jeopardy and may soon join him in the brig. This is as it should be for breaking the law.

But those government officials responsible for protecting the country against terrorist attack have a responsibility to perform their jobs diligently and competently. Rogue “vigilance committees” can form whenever this is not the case.

Let us hope that the strange case of Gunny Sergeant Maziarz occurs just this one time. Those leaders charged with protecting America have their responsibility in this regard. And those Americans who are back from fighting the jihadists may be monitoring the performance of America’s law enforcement leaders closest of all.

So what do you guys think? Is he a patriot or a vigilante? Will his actions bring about any change in the “it’s-all-for-show” operations manual our current bureaucracy uses?