Another Muslim protest has been mounted against a Swedish newspaper, this one in Uppsala, for its publication of a Modoggie.

According to The Local (thanks to Steen for the photos):

A large group of protesters gathered outside the offices of a second Swedish newspaper on Friday evening protesting at the publication in August of a cartoon depicting the Muslim prophet Muhammad.

The demonstration outside the offices of newspaper Upsala Nya Tidning (UNT) in Uppsala, 70 kilometres north of Stockholm, attracted around 550 protesters.

Organizers pro-Palestinian group Palestinska Folkets Förening (‘Palestinian People’s Association’) said they wanted to make Swedes in Uppsala aware of the publication and to extract an apology from the newspaper.

Per Erik Eriksson of Uppsala police said the demonstration had been give official authorization.

“It’s all very peaceful,” he said. 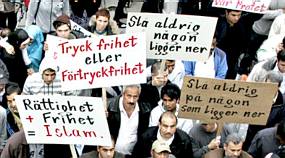 I attempted a translation of the signs that appear in the above photo, and got a couple of them, “Freedom of the Press or Freedom to Oppress” and “Righteousness + Freedom = Islam”.

Carpenter helped me with the third one:

“Slå aldrig på någon som ligger ner” means “Never hit someone lying down”. In this particular case, though, it is Sweden which is lying down and getting the s**t kicked out of it by over twenty Muslim states, with the ideological and religious support of 321,984,623 billion Muslims. Is that what they mean? Or do they incorrectly mean a vast Swedish newspapers’ conspiracy against Islam?

If only the latter were the real case… 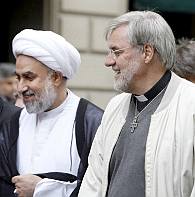 One of the photos shows a Christian minister accompanying a Muslim cleric. It’s another sign of the persistent Christian-dhimmi wishful thinking, the idea that we are all worshippers of one God, we’re the same inside, we all wish to live in peace, so why can’t we just get along?

I can’t identify the pastor’s denomination. Can our Swedish readers tell if he’s a Lutheran?

Apparently the demonstrators in Uppsala were unaware that the Muslim ambassadors came away satisfied from their meeting with Mr. Reinfeldt.

Today’s Zaman confirms that the Prophet’s emissaries to Stockholm were left with a warm fuzzy feeling after meeting with the prime minister:
– – – – – – – – –

Ambassadors of Muslim countries who met with Swedish Prime Minister Fredrik Reinfeldt on Friday to defuse tensions over a newspaper cartoon of the Prophet Mohammed said they had a “positive dialogue.”

The ambassadors were generally content with the meeting and most expressed belief that Reinfeldt was “sincere” and his explanations satisfactory.

Turkish Ambassador to Sweden Necip Egüz also participated in the meeting, which comes after another one held at the Stockholm Central Mosque between the Swedish premier and leaders of Muslim groups in Sweden.

Diplomats from 22 countries, including Iran, Iraq and Syria, met with Reinfeldt at government headquarters in Stockholm “to establish dialogue with the Muslim countries,” Reinfeldt’s press secretary, Oscar Hallen, told the media prior to the meeting. “We would like to underline that Muslims and Christians live side by side in Sweden. This can be possible by mutual respect,” Hallen’s statement stressed.

In a statement given after the meeting, Prime Minister Reinfeldt said, “We have had a very good dialogue.” The Swedish premier has been reaching out to Muslim groups in Sweden and abroad to avoid a repeat of last year’s mass protests in Muslim countries over Danish newspaper cartoons of the Prophet.

He noted that there was a mutual understanding of the need to “dampen” reactions to the cartoon. Reinfeldt also said he had explained to the ambassadors that in Sweden a prime minister cannot punish a newspaper for what it decides to publish whether he agrees with it or not.

He said he also thanked the envoys in their efforts to stop the incident from growing further. Talking to the Cihan news agency shortly after the meeting, Ambassador Egüz said the prime minister expressed his opinions regarding the recent drawing of Prophet Mohammed in a Swedish newspaper.

“Saying that Sweden was particularly well-known for liberties but also respectful to religious beliefs, he also stated that Sweden is home to nearly 400,000 Muslims. Regarding this last incident, he said he would personally never do anything to offend or hurt someone,” the ambassador noted, adding: “I think this has been a very positive and constructive meeting. The other ambassadors also expressed during the meeting that it has been most fruitful.” Egüz said Reinfeldt’s visit to a mosque in Stockholm the other day was also very positive.

Instead of saying, “We have had a very good dialogue,” Prime Minister Reinfeldt would have done better to declare, “We would like to underline that Muslims and Christians live side by side in Sweden. Until you can say the same thing for your respective countries, I have nothing to say to you.”

Alas, Mr. Reinfeldt lacks the necessary gonadic material to make such a declaration. He is not, after all, Danish.

Sverigedemokraterna (the Sweden Democrats), the party that is considered racist and Islamophobic by the mainstream, responded to the prime minister’s squishiness by posting several of the Modoggies on their blog.

Before yesterday’s meeting with the prime minister, the Muslim ambassadors had avowedly compiled a list of demands which they were to present to the Mr. Reinfeldt. Then, after the meeting was over, the official line changed — there were “no demands”.

Since then the newspaper Expressen has obtained a copy of the ambassadors’ letter (the original is in English; thanks to Steen for the tip).

The text of the letter is below. As you can see, there are no specific demands. However, the ambassadors’ argument seems to be that cartoons of the Prophet constitute incitement to violence under existing laws in Sweden.

In other words, the Modoggies are no more deserving of protection under freedom of speech and the press than would be shouting “Fire!” in a crowded theater or issuing a public demand for the murder of someone.

It’s a shrewd tack to take, and it will be interesting to see if the Swedish authorities take the hint and squelch Lars Vilks while maintaining that “freedom of speech” is still intact in Sweden.

We, Muslim Ambassadors in Sweden, take this opportunity to thank you Mr. Prime Minister for taking deep interest in the problem arising from the drawing and publication of the caricatures regarded by Muslims as provocative and insulting. We fully share with you the common objective of promoting mutual respect and understanding amongst different cultures and religions.

Muslims around the world have yet again been greatly hurt by this deliberate mischief. They regard it as a brazen assault on their religious sentiments. It is most unfortunate that the universally accepted principle of freedom of expression and press has been used to offend over 1.3 billion Muslims around the world.

It is indisputable that all freedoms, including the freedom of speech, come with responsibilities. None are absolute or unrestrained legally, morally, socially, culturally, or politically.

Rights and duties go hand in hand. Nobody has an inherent right to hurt others physically, mentally or emotionally. In any case, such conduct is universally regarded as violative of decency, good manners and civilized behaviour.

Freedom of speech is not a license to abuse other people or their most cherished values.

Such acts are also highly irresponsible. They greatly undermine the efforts of those who seek to promote respect and understanding among religions and civilizations. In this context we may recall the valuable contribution of the Swedish Institutes in Alexandria and Istanbul.

Even legally speaking, such reckless deeds amount to incitement to hate and violence. The result is disturbance of civic peace and creation of law and order situations. This must be prevented by all governments under their existing national laws.

The issue is not a demand for the respect of religion (!) — even though mutual respect between different communities is essential for peace and harmony in society. It is a demand not to be deliberately insulted. Is that too much to ask?

Muslims welcome an informed debate or dialogue over religion or its finer points. That is, inter alia, their religious duty. But vulgar satires do not constitute scholarly discourse. That is sheer mischief and should not be confused with art or artistic expression.

We take this opportunity to state that both international and Swedish laws are in perfect harmony with the position expressed above.

Mr. Prime Minister, we hope that your timely initiative and continued interest in the matter will prevent recurrence of such unfortunate practice. We, on our part, stand ready to extend our sincere cooperation both to you and your government. Please accept, Your Excellency, the assurances of our highest consideration.

5 thoughts on “More Protests, But No “Demands””