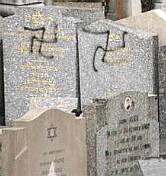 When I first saw the headline of this story, I thought that surely it must be some kind of hoax. Neo-Nazis in Israel!

We’ve often written about “suicide Jews”, the well-meaning Jews in both the United States and Israel who ally themselves with the Islamists and take up the cause of the Palestinians. But this goes a step further — actual, overt anti-Semitism and admiration of Adolf Hitler among Israeli Jews.

According to Fox News:

In a case that would seem unthinkable in the Jewish state, police on Sunday said they’ve cracked a cell of young Israeli neo-Nazis accused in a string of attacks on foreign workers, religious Jews, drug addicts and gays.

Eight immigrants from the former Soviet Union have been arrested in recent days in connection with at least 15 attacks, and a ninth fled the country, police spokesman Micky Rosenfeld said, in the first such known cell to be discovered in Israel.

All of the suspects are in their late teens or early 20s and have Israeli citizenship, Rosenfeld said. A court decided Sunday to keep them in custody.

The gang documented its activities on film and in photographs. Israeli TV stations showed grainy footage of people lying helpless on floors while several people kicked them, and of a man getting hit from behind on the head with an empty bottle.

Police found knives, spiked balls, explosives and other weapons in the suspects’ possession, Rosenfeld said. One photo that was seized showed one suspect holding an M16 rifle in one hand and in the other, a sign reading “Heil Hitler,” he added.

Police discovered the skinhead ring after investigating the desecration of two synagogues — which were sprayed with swastikas — in the central Israeli city of Petah Tikva more than a year ago, Rosenfeld said. Police computer experts have determined they maintained contacts with neo-Nazi groups abroad, and materials seized include a German-language video about neo-Nazis in the U.S.

Group members wore tattoos of Celtic crosses — a symbol adopted by white supremacists — and barbed wire fences, and the number “88,” code for “Heil Hitler” because “h” is the eighth letter of the alphabet. Another tattoo proclaimed “White Power,” and they were photographed giving the Nazi salute.

The group planned its attacks, and its targets were foreign workers from Asia, drug addicts, homosexuals, punks and Jews who wore skullcaps. In one case they discussed planning a murder, Rosenfeld said, without providing details. Some of the victims filed official complaints with police, and other victims were identified after police viewed the films and photos.

Police identified the group leader as Eli Boanitov, 19, of Petah Tikva — known as “Eli the Nazi.” Gang members were arrested in recent days, and a gag order on the case was lifted early Sunday.

“I won’t ever give up, I was a Nazi and I will stay a Nazi, until we kill them all I will not rest,” Boanitov was quoted as saying by a police statement.

Rosenfeld said all of the suspects had “parents or grandparents who were Jewish in one way or another.”

– – – – – – – – –
The members of the gang were Russian immigrants. Some Russian Jews have weaker ties to their Jewish heritage, due to decades of Communist oppression and aggressive secularization. Some came to Israel in the waning days of the Soviet Union simply to escape conditions in their homeland, and not out of any religious impulses.

But to the Nazis (and to Stalin, for that matter), these fellows most certainly would have been regarded as Jews. When the SS rounded them up in Smolensk or Pskov, it’s doubtful whether all those “Heil Hitlers” would have prevented them from being packed into the cattle cars along with the rest of their families.