Our Swedish correspondent Carpenter writes that, according to today’s Expressen, jihadi internet hackers have managed to close down Swedish websites in retaliation for the drawings by Lars Vilks depicting Mohammed as a Rondellhund.

Here is his translation of the full article:

Swedish sites are now being hacked 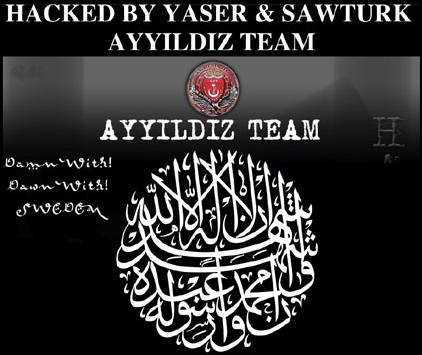 Artist Lars Vilks’ drawing of Mohammed as a roundabout dog has caused disturbances all around the world. For instance, in Pakistan, where a doll depicting prime minister Fredrik Reinfeldt was burned by a group of extremists. Several Swedish companies, organizations and private persons are now struck by the rage triggered by the drawing.

During the last few days, an aggressive group of hackers has attacked several Swedish websites. Earlier this week, the technology site IDG.se was struck. Among the other sites that were struck are a fan club site, a gambling site and a site belonging to a female artiste.

A blog with connections to the cyber-terrorists has the headline “Attack Sweden — damn with! Down with Sweden!” Then, following is read, in Turkish:

“The crisis in Denmark — now there’s the same crisis in Sweden. We’ve forced Denmark to apologize, and they have done so [sic!]. We know how to force Sweden to apologize. We’ve initiated an attack through internet sites.”

The targeted Swedish site isn’t available to visit. Instead, visitors come to another site with black background, on which it, for instance, is read in Turkish:

“We want to announce that we are descendants of the Ottoman empire. […] I’m a witness that Mohammed is the last prophet of God”

According to IDG.se, the group has connections to two persons who managed to close down parts of the UN’s website. Fredrik Bernsel is in charge of the IDG.se:

“The attack didn’t impact us seriously, since it was a subordinate page that got attacked, thank goodness. It wasn’t good either, but no catastrophe, really.”

How does it feel to get involved in this?

“I don’t think we’re involved in the conflict, it is haphazard which sites getting attacked.”