Now that the Modoggie affair has broken into the MSM, the story is settling into a particular fixed narrative.

First of all, to line up the current kerfuffle with the Motoon crisis, the “Mohammed as a Rondellhund” drawings are being described as “cartoons”. I’m not sure how to label them, but they’re definitely not cartoons. And Lars Vilks must be annoyed that he is being universally described as a cartoonist. What an insult for an artist of his prestige and stature!

And, as I noted yesterday, the media were all too ready to create the cut-and-paste story that “Sweden is sorry”, presumably because that’s what they expected, based on Sweden’s traditional Multicultural stance.

But that’s not the way the story has played out so far. Both the Swedish government and Sweden’s newspapers are refusing to back down. So now the MSM will have to shift to the “Islamic Rage” meme, with Muslim mobs around the world eager to go along with it. Can it be much longer until Rage Boy makes an appearance?

Here’s the latest from AFP:

A leading Swedish newspaper on Saturday said the country would not apologize for the recent publication of a Prophet Mohammed cartoon which has inflamed devout Muslims around the world.

Dagens Nyheter said in an editorial Sweden “has a duty from now on to defend its principles and present an open dialogue.”

It said offended Muslims would not receive the apologies they are asking for.

Swedish newspaper Nerikes Allehanda published a cartoon on August 18 depicting the Prophet Mohammed as a dog to illustrate an editorial on self-censorship and freedom of expression and religion.

The Kabul Times, a religious Afghani newspaper, published Saturday an article by religious leaders expressing their indignation at this “provocation”, according to Swedish press agency TT. 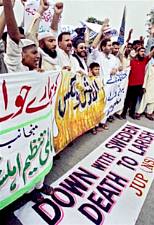 The publication of the cartoon has prompted angry reactions from Iran and Pakistan, which have both summoned Swedish diplomats to protest. The 57-nation Organisation of the Islamic Conference has also condemned the publication and urged the Swedish government to punish the artist and the publisher and demand an apology.

But Lars Vilks, the Swedish cartoonist in question, said he had no intention to apologise.

“You must be allowed to criticise religion, but I am not opposed to Islam,” he told Danish agency Ritzau. He had, in the past, also drawn a “Jewish sow”, Vilks said.

He also said he had received death threats.

The story includes a photo of the demo in Lahore taken from a different angle than the one I displayed on Friday. In it the entire wording on the sign is now visible, and where I thought it must have said “Death to Lars”, it actually says “Death to Larish”.
– – – – – – – – –
So who’s Larish? There’s a famous baseball player named Jeff Larish. And according to various internet sources, the surname Larish can be English, Welsh, German, Swedish, or Ukrainian. But there’s no apparent connection with the Rondellhundar.

So we’ll just have to assume that Rage Boy doesn’t spell very well.

I detect a slightly tremulous note from at least one Swedish newspaper:

Svenska Dagbladet, another broadsheet, said Sweden was now in a situation “which could escalate and slip away from Swedish control”.

Yes, it could, and it probably already has. Only immediate and full submission, accompanied by an abject apology from the newspapers and the government, will suffice. That was the path Norway chose last year after a Norwegian paper published the Motoons, and it’s what most of us thought Sweden would do.

But the Swedes seem to be taking lessons from their Danish cousins, and have suddenly grown a set of manly generative organs. If the AFP story is any indication, the media are having a hard time coming to terms with this new behavior:

Some observers did, however, note important differences with Denmark, where the publication of cartoons deemed offensive two years ago caused deadly riots in several countries.

Unlike its Danish neighbor, Sweden has a reputation for taking in refugees and immigrants, the paper said. Sweden is the primary destination in Europe for asylum-seeking Iraqis, who are the second-largest immigrant community there.

It is very perplexing. What do all these persons of Swedish background think they’re doing? Have they forgotten all those decades of Multicultural indoctrination? Have they given up on Alla ska med?

We live in interesting times.