As you may remember, a Danish group burned Mohammed in effigy back in June, at the Midsummer Festival.

Now a promised follow-up video has arrived. This time the Danes have done more than just burn ol’ Mo.

We got this note today, along with a YouTube link, from someone in Denmark:

The Independent Danish Resistance Group have produced an additional video in correspondence to the latest political development in the Danish government. The video is a reaction to the outrageous statement made by the Muslim leftwing extremist politician Asmaa Abdol-Hamid some weeks ago. 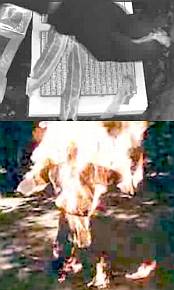 Asmaa Abdol-Hamid, as reported here previously, stated in an interview that the Danish soldiers in Iraq were legitimate targets for the Iraqi “resistance”. Well, it seems that the Danish resistance has struck back.

In the video embedded below, you will see strips of bacon laid across a Koran before the book is set on fire. After that Mohammed is torched again. And there are other entertaining moments in this video which I won’t describe; you’ll have to watch.

The soundtrack is a German rock song — I hear the words “fire and water” in it, but otherwise can’t tell you what it’s about. Maybe some of our German-speaking readers can help with a translation.

Better watch this video now — you know it won’t be up for long!

14 thoughts on “Second Course: A Flaming Mo, With Bacon”