The month of April in the Counterjihad Calendar is represented by India. More than any other country in the world, India serves as a beacon of resistance to the violence of the Great Islamic Jihad.

We spend a lot of time on Europe and the Middle East here at Gates of Vienna, but the slaughter and destruction visited by the Muslims on Europe pales by comparison with that done to Hindus, Buddhists, Sikhs, and Jains in India. Since the hosts of Mohammed first entered India in the latter half of the 7th century, millions of infidels have been slaughtered and enslaved, countless holy shrines desecrated and destroyed, and entire cultures erased.

After consulting with a helpful correspondent from India, I chose Somnath Temple as the monument for the calendar. Its own history recapitulates that of the Hindus in general in their struggle to resist the Muslim conquests.

Somnath Temple stands on the western coast of Gujarat, and is dedicated to the god Shiva. It has been destroyed no fewer than six times by Muslim invaders, and was rebuilt each time by the Hindus:

Somnath was rebuilt in its current form after the independence of India in 1947 (click for a larger image): 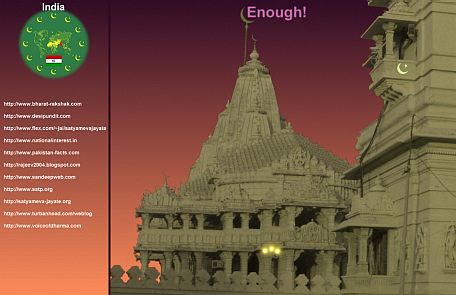 I chose English for this image because English is generally used as a common language in the multilingual nation of India.

The Indian blogosphere is enormous, and I have had a hard time picking out Counterjihad websites to include in the list for the calendar. The English-language blogverse in India is larger than the rest of the Anglophone blogosphere combined. I spent hours going from blog to blog, clicking and looking and reading about local and global politics, culture, fashion, movies, science, and anything else that people can blog about.

But nailing down specific anti-jihad sites was difficult. I hope that our Indian readers will help me.

I definitely need more.
– – – – – – – – – –
And more input is welcomed from readers in each of the other countries to help me create lists of URLs for that country. The goal is to fill up each sidebar with Counterjihad sites.

For each country involved, I invite readers to post suggested Counterjihad links in the comments, or send them via email. I particularly need links for Britain, the Netherlands, Spain, Greece, India, and Italy.

The finished calendar (God willing and the creek don’t rise) will be up at our Café Press site sometime in September.

Next up on the calendar is Sweden, for the month of May.

3 thoughts on “The Counterjihad Calendar: April”