It’s Sunday, so I’ll take a little break from the Jihad.

When I visited Denmark back in April, I stayed with Phanarath in Århus for a couple of nights. Århus is the second-largest city in Denmark, and is on the east coast of Jutland, the mainland of Denmark. 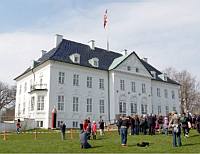 Queen Margrethe’s summer palace is in Århus, and by tradition every year on her birthday the queen, along with other members of the royal family, appears on the balcony of the palace to greet her subjects. Her birthday is April 16th, which was during my visit to Denmark, but I didn’t get to see the queen in person, only in newspaper photos. 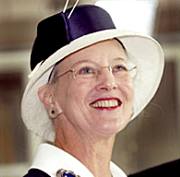 I couldn’t find a good set of online photos of this year’s birthday appearance, so the photos shown below are from Hendes Majestæt Dronning Margrethes 66 års fødselsdag, Her Majesty Queen Margrethe’s 66th birthday, in 2006.

As we have noted previously, Queen Margrethe is a spunky babe, a woman who is not at all afraid to swim against the politically correct tides of our time. In this she is like her subjects: the Danes are unique among Western nations in their cultural refusal to suck up to the aggressive Islamists in their midst. 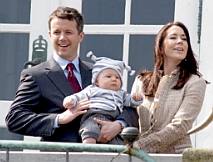 Danish cultural unity centers around the monarchy. Just as in other European nations, the sovereign has no real power, having been reduced to a ceremonial position as a national symbol. But in Denmark — unlike, for example, Britain — the monarchy is popular. The Danes hold their kings and queens to certain standards, and if the royals meet them, then they are accorded respect and esteem. The current queen has met those standards, and her son Frederik, the crown prince, is also very popular, having the common touch combined with just the right kingly aspect to endear him to the people.

Crown Princess Mary is Australian, and has really made a big hit in her adopted country. According to Kepiblanc, she became fluent in Danish remarkably quickly, which is an important attribute for a future queen.
– – – – – – – – – – 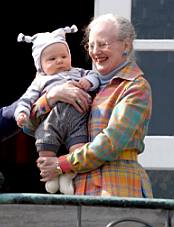 Not only that, Mary has produced the next heir to the throne, the little prince Christian. In this year’s balcony photos, being a year older, he was attired in a more sober fashion. But I like the pictures from last year better, with the little guy squinting in the sun and wearing his goofy alien bonnet.

According to Steen, one of the reasons for the enduring success of the Danish monarchy is that the line has been unbroken for more than a thousand years. Unlike the kings and queens of England, who were switched like cuckoo eggs from among the royal bloodlines of Holland, France, Germany, and Scotland, the Danish monarchs have always been Danes, descended from first king of Denmark, Gorm the Old, the Viking king who ruled in the middle of the 10th century.

But the Danish monarchs avoided the mistake of inbreeding. Unlike the other royal houses of Europe, whose scions were reduced to idiocy, gibbering lunacy, and haemophilia through centuries of marrying their cousins, the Danes were willing to import the blood of commoners from distant lands to enrich the royal family tree.

Crown Prince Frederik has carried on this tradition, bringing home a beautiful bride from the Antipodes, a woman who carries those robust Australian genes. Long live den lille prins Christian!

While I was in Århus, Phanarath told me an amusing story about his hometown and the Queen. Phan swears this is true; he says it happened to two friends of his, George and Fred (not their real names).

It seems that on a warm summer’s evening, George and Fred were engaged in a time-honored Danish custom loosely translated as “beer-in-a-bag”. Beer is freely available everywhere in Denmark, and is often purchased from kiosks, which include not only free-standing booths, but also small convenience stores and the like.

A group of enterprising revelers will travel on foot from kiosk to kiosk, buying just enough beer at one kiosk to carry with them in a bag to the next one. By the time one bagful of beer is finished, the next kiosk is at hand, and so the process continues.

George and Fred had been to quite a few kiosks that evening in Århus, and “beer-in-a-bag” had proceeded to the point where the two were none too steady on their feet. At one point they collapsed in laughter onto the grass of a park, and, still laughing wildly and dragging their bags of beer, started crawling aimlessly through the bushes.

Little did they realize that their drunkards’ crawl had taken them through the shrubbery to the outer edges of the palace grounds. Much to their surprise, when they emerged from the bushes, there stood Queen Margrethe, out for a stroll in the garden and smoking a cigarette.

She turned to them angrily, waved an imperious hand towards the bushes behind them, and said, “Out! Get out! The same way you came in!”

And together the two of them turned meekly around and crawled back into the bushes.

This story has a second punch line.

Phanarath has cousins in America, young men who were born in Denmark, but who came here when they were small, so that they are indistinguishable from any other Americans.

Phan was over here visiting one of his cousins, and told him the “beer-in-a-bag” story just as I have related it above.

After he reached the dénouement, his cousin was silent for a little while.

Then he asked, “Do the Danish people know that the Queen smokes?”

Thanks to Phanarath for correcting my memory of the wording. Age has taken its toll…

3 thoughts on “A Queen for All Seasons”