I miss Minh Duc very much. He was one of my favorite commenters and bloggers, both for his wonderfully wacky English, and for his willingness to share his experiences. Here is a snip of one of his last posts, where he weighs in on the absurdity of our tax code. He explains first that he once worked part time preparing other peoples’ taxes. Then he says:

Our tax system is so bizzare that the tax payers cannot report their income to the government — and on top of the already heavy tax burden, have to pay someone else to do so. My friends, you are not less intelligent because you could not fine your own tax. Many of my clients were successful doctors and brilliant engineers. The idiots are the people who wrote the tax code. To quote my drill sergeant in Basic Training, the Internal Revenue Code, “was written by four monkeys on a crack pipe.” 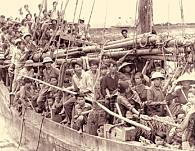 Minh Duc was one of the boat people out of Vietnam. As the Democrats’ hysteria sounds increasingly like a shameless Vietnam-Déjà-Vu, I think of him often, and wish he were still blogging.

Minh Duc may not be unique, but I don’t personally know of anyone with his experience. Not only did he endure the re-education camps and killing fields after we abandoned the Vietnamese to their bloody fate, he also survived the boat trip and made it to the US. When he grew up, he joined the military and served for several years in Iraq.

He was intelligent, funny, and informed. I do wish he were still around to serve as the conscience for those who would turn tail and run from Iraq. Every time one of them opens their mouth, I think of him and how he might reply to these quislings.

Today I came upon an essay that would appeal to Minh Duc. Wherever he is, I hope he reads it.

Here is an excerpt from “I Say Again, They Are Cowards and Tucktails” –

To the men and women who would do this, I maintain that you are nothing but a group of tucktails. If the Iraq War is so bad, so immoral, do everything in your power to stop it. Allocate no funds. Bush vetoes? Keep allocating no funds. Force Bush to choose between literal force protection and a staredown.

Stupid, immoral, cowardly excuses for human beings, the lot of you. If this war is merely a waste of lives and treasure, you are honor-bound to stop it at all costs. So do it. Relive the 1970s. Show us that you accept the inevitable slaughter of millions as irrelevant so that we can all watch the evening news without being bothered. Prove that refugees dying on boats and in camps are merely pictures, and not men, women, and children possessed of human dignity, being tortured because the United States won’t live up to its promises. Remind the world again that we are a paper tiger, and then grieve when another embassy is held hostage.

Heck, why wait? Why don’t we go slaughter a million Iraqis in bombing runs, so this time the blood will be directly on our hands, and we can avoid the irritating images of boat people and other refugees fleeing genocide?

Well, this man has written my thoughts as clearly as if he looked in my head and decided to put down on paper what he saw roiling in my brain.

Please read the whole thing. Then contemplate what Minh Duc and the other survivors of Vietnam who made it out must be thinking of us now.

We are no more than boat people ourselves: a nation cast adrift, tossed this way and that with each passing tide. We will have to answer for our pusillanimity when history judges us for fleeing once again.

What happens to a country which repeatedly fails to stay the course?

12 thoughts on “A Nation Cast Adrift”