Last year Jens Orback, the Democracy Minister in the former Social Democratic government of Sweden, caused a stir by saying on a state radio program, “We must be open and tolerant towards Islam and the Muslims so that when we become the minority they will be the same towards us.” (Vi måste vara öppna och toleranta mot Islam och muslimerna för när vi blir i minoritet kommer de att vara det mot oss.)

Now a Dutch government minister has added her own voice to the chorus of accommodation, capitulation, and dhimmification in Europe.

According to an article in Saturday’s Trouw, the people of the Netherlands will just have to get used to increasing numbers of Muslims in their midst. Many thanks to Yorkshire Miner for the prompt translation:

Vogelaar: Islam is a part of our culture
“Stop this fear of Islam”

The Islamic culture has nestled so deeply in Dutch society that in the long term the Netherlands can be described as a land with a Jewish-Christian-Islamic tradition.

Wilders strongly criticized minister Vogelaar over her comments about Islam 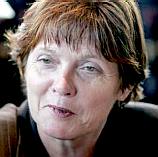 “Muslims are not going away,” said Ella Vogelaar (PvdA) [Dutch Labor Party] today in a interview with Trouw. The Minister for Housing, Neighborhoods, and Integration hoped to end the negativism and fear of Islam. “I want to help Muslims feel at home here. Islam and Muslims must be able to put down roots here because Muslims are also citizens of this land.”

Vogelaar has no problem if the local government financially supports religious organizations of the new Netherlanders. “As long at it is social aims you subsidize, and not religious activities. Otherwise you cross a line.”

Vogelaar sends with her pronouncement a completely different signal to the Muslim groups than have the politics of the last few years. Since the beginning of the Balkenende Cabinet in 2002 the policy was for immigrants to adapt to the Dutch norms and values.

Although the minister will not remove the obligation for assimilation and learning the Dutch language, she speaks of a mutual process whereby the cultures influence and stimulate each other. “It is important that such a large group root themselves in our society and become a permanent part,” said Vogelaar